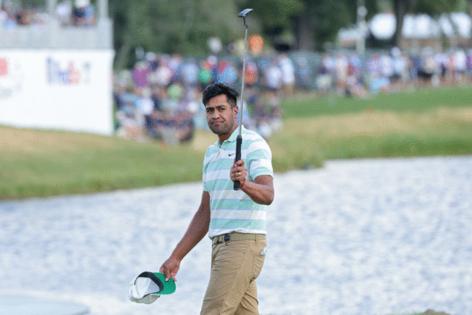 His 18-under-par score after a final-round 67 beat Sungjae Im and Emiliano Grillo by three shots each and tournament leader-for-so-long Scott Piercy, Fargo's own Tom Hoge and James Hahn by four.

Until then, Finau had finished second on tour 10 times, third another three times and had top-10 finishes at least twice in all four major championships while he won just twice since he turned pro in 2007.

This season had second-place finishes in both Canada and Mexico.

Finau trailed tournament leader Scott Piercy by five shots and second-place Emiliano Grillo by one when Sunday began, but everything turned on a wild back nine when Piercy shot a final-round 76 with a back-nine 41 while Finau was steady and sure in shooting a 33 that include a bogey 6 at the last.

Pierce had held at least part of the lead the first three rounds and went as low as 20-under par and led by as many as five shots after he birdied TPC Twin Cities, sixth hole.

He then made five bogeys and a triple-bogey 7 in a disastrous stretch of eight holes starting with No. 8.

That triple-bogey 7 came on the watery 14th hole that cost two-time Masters champ Ben Crenshaw the senior 3M Championship twice on a Sunday once upon a time.

Piercy's drive buried like the proverbial fried egg near the lip of a bunker on the right-side fairway. Piercy left that second shot in the same bunker and hit another ball into the water on hole's left before he missed a short putt for double bogey.

Meanwhile, Finau made five birdies — including three in a row on the back nine — and a single bogey that took him from well behind Piercy into a four-shot lead.

Finau maintained that lead even after the par-3, 17th hole when he drove his tee shot over the green and off the corporate tent behind it. It caromed back through the rough behind the green before it settled pin high against the boulders that separate the green from the water that fronts that green.

He made par from there and kissed the ball, held his heart and pretended to be weak in the knees before he went on to the 18th and final hole suddenly with a four-shot lead.

Finau's tee shot there found the water right of the fairway, but he escaped with a bogey 6 for the three-shot victory.