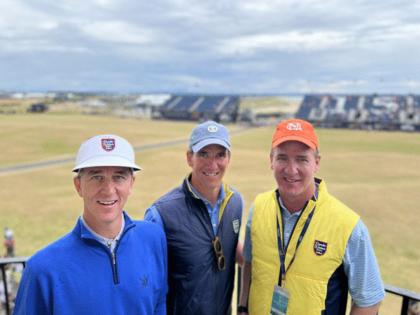 ST ANDREWS, Scotland — To the immediate right, the 18th hole of the Old Course, among the most famous spots in golf.

To the left, the Swilcan Bridge. And in the distance, the St Andrews beach where those "Chariots of Fire" footraces were filmed.

Watching Saturday from a lofty perch above it all, NFL royalty.

The Manning brothers — Peyton, Eli and Cooper — had just returned from their own round of golf and had gathered with guests on a spacious balcony overlooking the legendary finishing hole of the British Open. They are among the group of investors who recently bought and renovated the historic Rusacks Hotel, which this week is the equivalent of the world's biggest luxury box on the 50-yard line of golf's Super Bowl.

"As an investor, I just wanted to come over here and see if it existed," joked Peyton, needling his older brother, Cooper, who was responsible for pulling together the capital for the project.

It's an ambitious endeavor, the next phase of an enterprise that started with boutique hotels in U.S. college towns. The group now has three other deals for golf course hotels in the works, at North Berwick and Troon in Scotland, and Royal County Down in Northern Ireland.

"When I told people about this project, that we had a chance to buy this place, and that we were never going to sell it, they were blown away," said Cooper, senior managing director of AJ Capital Partners.

Matter of fact, Peyton had just returned from the actual Mona Lisa, making a trip to watch major championship golf after he and his wife, Ashley, had a vacation in London and Paris.

Peyton has become a big Rory McIlroy fan in recent years, having gotten to know him while playing at the Memorial Tournament at Muirfield Village. McIlroy is heading into the final round of the Open tied for the lead with Viktor Hovland.

CHARLOTTE, N.C. — The emotion flowed out of Si Woo Kim on the 15th green with a furious fist pump to celebrate the putt he rolled in to answer Justin Thomas. In almost the same motion, he put a finger to his lips to ...Read More

CHARLOTTE, N.C. — Xander Schauffele had some choice words for how he was feeling Saturday evening after falling in his afternoon four-ball match. Suffice it to say, he was upset.

CHARLOTTE, N.C. — Among the youngest players ever to play in the Presidents Cup, International rookie Tom Kim has been among the brightest of stars for his team this week at Quail Hollow Club.

And under the most intense...Read More

CHARLOTTE, N.C. — When Patrick Cantlay drained a putt from deep on one of the toughest par-4s on the course, Hideki Matsuyama and Tom Kim shook their heads and exchanged a smile as if to say, “What else can we do?”