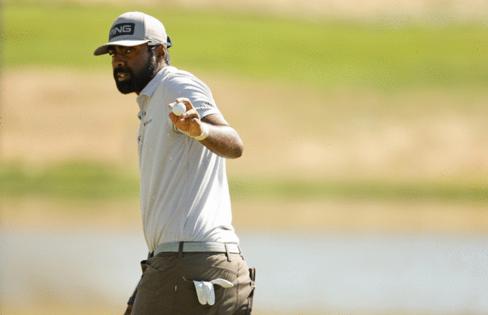 CROMWELL, Conn. — Entering Saturday, world No. 15 Xander Schauffele had a five-stroke lead over the next closest competitor — his friend, world No. 6 Patrick Cantlay. Five strokes — tied with Tommy Bolt and Gene Littler, who did it in 1954 and 1959, respectively, for the largest lead through 36 rounds at Connecticut’s PGA event.

The pair played together to win the Zurich Classic of New Orleans in April, and looked forward to challenging each other on the TPC River Highlands course at the Travelers Championship this weekend.

Cantlay got hot and shot a third-round 7-under-par 63, which made up four strokes on the lead as Schauffele cooled off. He stands at 16-under, one behind Schauffele.

“I thought I played really well today,” Cantlay said. “No real mistakes. I could have made a few more putts, but all in all it was a great round.”

Cantlay, who holds Travelers’ records of his own, registered four birdies on the back nine. His fairway shots consistently left him with several relatively easy putts on a green that was baked by the 90-degree weather. The surrounding crowd following the top group held its collective breath on the par-3, 158-yard hole 11 when Cantlay’s tee shot rolled inches left of the tournament’s first hole-in-one this year.

Schauffele’s first bogey of the tournament came 49 holes in after he landed his first tee shot in the water on 13. He finished the third round 3-under 67 with his lead diminished.

“I would love to have that tee ball back on 13. For the most part I knew it wasn’t going to be easy to protect a lead, especially when it’s five shots and it’s easy to get comfortable. It’s easy to hit it to 30 feet out here with a wedge. But that’s just not going to be enough to win. So, I’ve got to make a few more birdies [Sunday],” he said.

Schauffele made four birdies — including two in his last three holes — to finish at 17-under.

“(Schauffele’s) very consistent,” Cantlay said. “I think you saw that today. Even when he hit a loose shot or something he didn’t let that affect him.”

Cantlay wasn’t the only competitor who made up ground on the leader. After what was once a five-shot separation, there are now five contenders within five of the lead.

PITTSBURGH — The defection of Brooks Koepka to the LIV Golf series — with another prominent name expected to soon follow — is yet another example of the Saudi-backed circuit targeting some of the PGA Tour's most ...Read More