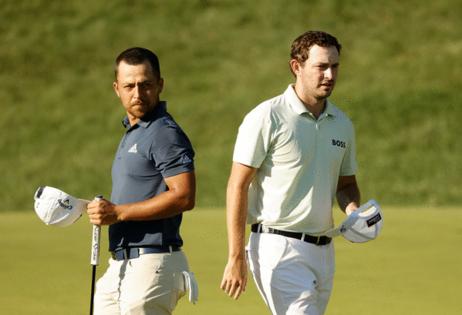 “We definitely bring out the best in each other,” Cantlay said then.

Paired as competitors for the third round of the Travelers Championship, they pushed each other again Saturday. Schauffele, who started the day with a five-stroke lead, was worried about being “hunted down,” and Cantlay did some hunting.

Schauffele shot 67 — and lost ground. He’ll take a one-stroke lead over Cantlay into what is shaping up as another of those dramatic finishes the Travelers is known for.

“It will be fun,” Schauffele said. “I’ve been looking forward to playing with Pat in a final round. We don’t get paired together very often in regular tournaments, only in those team ones. So there’s a certain level of comfort we have playing with each other and hopefully that pays off and hopefully we can make a lot of birdies.”

Schauffele, 28, has been rock steady, with back-to-back 63s to start the tournament. On Saturday, he extended his run to 48 holes without a bogey until hitting his tee shot into the water on No. 13. He scrambled back to take a six on the par-5 hole, then birdied 16 and 17 to take back the lead.

“He’s very consistent,” Cantlay said. “I think you saw that today. Even when he hit a loose shot or something he didn’t let that affect him. Didn’t make too many mistakes. He closed with a few birdies. So I expect a great challenge out there tomorrow.”

Cantlay, 30, has seven PGA Tour wins and was the FedEx Cup champ in 2021. He’s best known at TPC River Highlands for shooting a 60 in 2011, the lowest round ever for an amateur on the PGA Tour. He’s never finished higher than a tie for 11th in the Travelers, though.

“It’s just a good memory that I draw on almost every time I come back to this tournament,” Cantlay said.

PITTSBURGH — The defection of Brooks Koepka to the LIV Golf series — with another prominent name expected to soon follow — is yet another example of the Saudi-backed circuit targeting some of the PGA Tour's most ...Read More