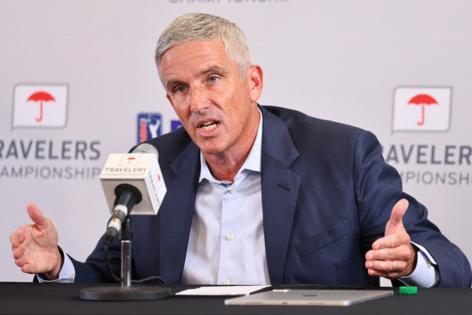 CROMWELL, Conn. — Jay Monahan played his collegiate golf at Trinity College, and he also played hockey there. In his fifth year as commissioner of the PGA Tour, he may need recall all of his old forechecking, elbowing and slashing skills because he’s in a fight for his organization’s life, and there is no skating through or away from it.

“I am not naïve,” Monahan said at the start of a 40-minute press conference at the TPC River Highlands, where the Travelers Championship begins Thursday. “If this is an arms race and if the only weapons here are dollar bills, the PGA Tour, an American institution, can’t compete with a foreign monarchy that is spending billions of dollars in an attempt to buy the game of golf. We welcome good, healthy competition. The LIV Saudi Golf League is not that. It’s an irrational threat; one not concerned with the return on investment or true growth of the game.”

Monahan, 52, was speaking just as Brooks Koepka’s jump to the LIV Golf series was becoming official, which seemed to take players and officials off guard this week. “I’m surprised at a lot of these guys because they say one thing and then they do another,” Rory McIlroy said. “It’s pretty duplicitous on their part to say one thing and then do another thing.”

It’s one thing for a golfer on the back nine of his career to make the jump to play in glorified exhibitions for some guaranteed cash, but Koepka, 32, is in his prime. Maybe his choice says more about his disdain for regulations and press conferences, but the threat grows with his departure and Monahan has grown more combative to meet it.

He has history, legacy, relevance on his side. Will that be enough?

“We don’t expect to overcome this current challenge by relying on our legacy and track record alone,” Monahan said. “We’ve been on a path for a number of years to strengthen and evolve our product.”

The LIV threat is not going to go away or be easily extinguished, which is why talk of it has dominated the run up to the Travelers. That’s even with massive crowds expected with the end of pandemic restrictions and the presence of the top two golfers in the world, Scottie Scheffler and McIlroy, headlining another impressive field.

After a series of meetings, with players and his policy board, Monahan was ready to roll out a series of planned changes designed, in short, to give PGA members opportunities to earn more guaranteed money, with fewer tournaments, and increase purse sizes at a number of events.

These changes represent modest sums compared to the nine-figure deals LIV Golf is offering — Koepka, it was reported, is receiving up to $150 million — but Monahan is betting that, with a little more money, coupled with the long-standing prestige of the PGA Tour, the flow of defectors will stop.

“I don’t know how much money I’ve made this year,” said Scheffler, who has won four tournaments, including The Masters, and had nine top-10 finishes, “but it’s definitely more than I deserve for whacking a little white golf ball around. For me, the memories that I have playing on this tour and the dreams I have of wanting to be on this tour can’t be replaced by anything financial. Money’s money and it’s not something that I’m trying to let control how I live my life.”

KANSAS CITY, Mo. — Jake Falcon, the owner of a Kansas City-area amateur golf tour, decided this year that he would give away a one-year car lease to any golfer who made a hole-in-one.