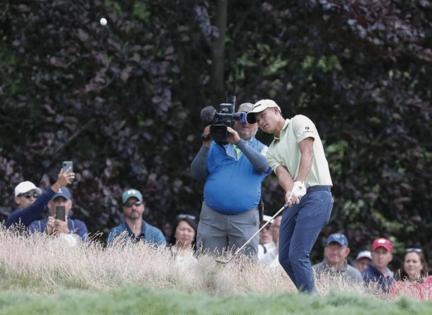 BROOKLINE, Mass. — Some of the lasting images over the first few days of the U.S. Open were of golfers being tormented by the assorted land mines at The Country Club.

Rory McIlroy couldn’t contain his frustration on Thursday in the opening round, slamming his club repeatedly into the sand after going bunker to bunker.

Footage of that temper tantrum on the fifth hole lit up social media.

So did his romp in the fescue on Friday, needing three shots to advance the ball out of the thick grass to the right of the green on No. 3.

Then there was Phil Mickelson’s four-putt from 12 feet on Thursday. And Justin Thomas’ chip on the 10th hole Friday from the tall grass that went 5 feet, setting up a double bogey.

Yes, The Country Club can be sinister.

But for the most part, the formidable Brookline venue wasn’t an unbearable beast.

That is, until Saturday.

There was one more obstacle added to the list that frustrated golfers on moving day.

The course basically bit back thanks to a wind change and much colder conditions than the previous two days, with temperatures in the low 60s at the start of the day, then again, toward the end of the day.