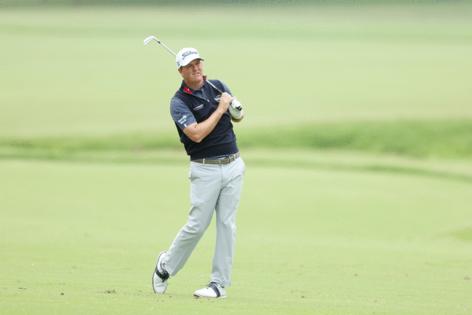 FORT WORTH, Texas — Life is going pretty well for Tom Hoge these days.

He’s made the cut in the last six major championships he’s played, posting his first career top-10 finish last week at the PGA Championship. He’s officially locked into the British Open, where he’ll make his debut in that tournament at historic St Andrews in July. He’s in great position to play in his first TOUR Championship in August, sitting eighth in the FedEx Cup standings. And the list goes on.

For now, though, Hoge is focused on playing well in the Charles Schwab Challenge. He’s missed the last two cuts in his hometown event at Colonial Country Club, but the former TCU great feels momentum is on his side this year.

“It’s a week that I desperately want to play well. You’ve got so much on the line, a lot of friends and family in attendance, so I’m excited things are going well.”

Hoge, who turns 33 today, will be playing in his sixth Colonial. His best finish came in his inaugural tournament, tying for 17th in 2016. He finished tied for 42nd in 2018 and tied for 40th in 2019 before missing the cut the past two years.

Easier said than done at Colonial, of course. But Hoge has developed into a threat every week on the PGA Tour, winning his first event at the AT&T Pebble Beach Pro-Am in February. He’ll be among the contenders this week.

For Hoge, it’s been a rewarding, but not unexpected, season.

“I’ve certainly felt I was capable of having a year like this but obviously I hadn’t done it until this point,” Hoge said. “It’s hard to put a finger on what exactly changes. More than anything, it’s just been a lot of good weeks building on top of each other. Even finishing 17th at the Byron Nelson two weeks ago or ninth at the PGA last week, those are weeks in the past that I might’ve made a few bogeys on the back nine and finished 30th instead of 17th.

“It’s little things like that that keep adding up over the course of the season.”

One of the benefits for Hoge is his success has translated into what he’s been able to do off the course. He donated $50,000 of the $300,000 he won through the RSM Birdies Fore Love program during the Fall Series to the Northern Texas PGA Foundation in March. That money goes toward paying entry fees and scholarships for children from less fortunate families.

This week, Hoge took part in another charity presentation when HOPE Farm received a $10,000 check thanks to Hoge’s play through the PGA Tour Charity Challenge.

Each tournament involved drafts a fantasy team each week and Colonial happened to have Hoge on its team when he won at Pebble Beach. That earned a $5,000 contribution to HOPE Farm, in addition to the $5,000 participation contribution.

“So much stuff happened so fast after I won,” Hoge said. “It changed my life and now that it’s helping the lives of others around our community is pretty cool, too.”

MINNEAPOLIS — The kid with a quirky swing who made a name for himself three summers ago as the first winner of the 3M Open will not be back in Blaine in 2022.

He might never tee up in a PGA Tour event again.

DETROIT — The Rocket Mortgage Classic will be the only golf game in town.

But it won't be the only golf game that draws eyeballs and intrigue late next month.

Michael Thorbjornsen missed his birdie putt, then tapped in for par at 18 and the crowd gathered around the amphitheater at the TPC River Highlands began to swell in volume. Thorbjornsen, a quiet teenager, walked over to ...Read More

CROMWELL, Conn. — For 20-year-old amateur Michael Thorbjornsen, the thought of being in contention on Sunday at the Travelers Championship doesn’t bring along as much pressure as one might think.

CROMWELL, Conn. — Entering Saturday, world No. 15 Xander Schauffele had a five-stroke lead over the next closest competitor — his friend, world No. 6 Patrick Cantlay. Five strokes — tied with Tommy Bolt and Gene ...Read More