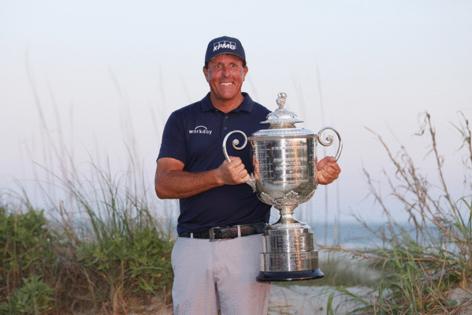 BENTON HARBOR, Mich. — The Missing Man isn't quite the story this week that it was last week.

But Phil Mickelson's continued absence from the golfing world — he didn't defend his PGA Championship at Southern Hills, and he's not playing the Senior PGA Championship at Harbor Shores in western Michigan, and there's no telling when or if he'll be back — remains tough to ignore.

Mickelson hasn't played a competitive golf tournament since early February, when excerpts from an explosive biography on Lefty were dropped, in which he sympathized with the new Saudi Arabia-backed golf tour, dismissing the Saudis' human-rights atrocities — specifically, the murder of a Washington Post journalist and the killing of gays — while also accusing of greed on the PGA Tour which has lined Mickelson's pockets to the tune of nearly $100 million over his three decades as a pro.

The question The Detroit News posed to some of the notable names in this week's 156-player field: Does Mickelson return to the game? And if so, how and when?

"Well, that's a tough question, just because I just don't know, really — I've heard stuff that's going on in his personal life, but I don't know if it's true, I don't know for sure," said Tom Gillis, a Lake Orion native who, from his years playing professional golf in Europe, on the PGA Tour and on the Champions Tour, is among the most tuned-in golfers to the behind-the-scenes drama.

"So, I don't really know totally what he's dealing with. Obviously, it's fairly profound if he's not playing at all. I don't know if he's suspended; none of us know.

"I just hope he gets everything in order and figures this whole thing out, because he's good for the Tour. He's just like any human being. We all have our flaws. I just wish him well, either way."

Mickelson, 51, arguably among the top-five most-popular golfers who've ever lived, was at the very top of his professional life one year ago this month, when he won the PGA Championship at Kiawah Island, making him in the oldest major-winner ever. It was his sixth major championship.

Now, he's approaching four months of being completely out of the spotlight, with no end in sight.

In mid-February, he issued a two-page Twitter post that was, in part, an apology for the comments he made to journalist Alan Shipnuck about the Saudi tour. All we've heard from him, or more accurately his team, since was his representatives signing up him for the PGA Championship, from which he eventually pulled out. Shipnuck's book, an unauthorized biography detailing all the good, bad and ugly with Mickelson — including a massive gambling addiction that has cost him tens of millions of dollars over the years, and is believed to have left him straining financially in recent years — dropped during PGA Championship week.

MINNEAPOLIS — The kid with a quirky swing who made a name for himself three summers ago as the first winner of the 3M Open will not be back in Blaine in 2022.

He might never tee up in a PGA Tour event again.

DETROIT — The Rocket Mortgage Classic will be the only golf game in town.

But it won't be the only golf game that draws eyeballs and intrigue late next month.

Michael Thorbjornsen missed his birdie putt, then tapped in for par at 18 and the crowd gathered around the amphitheater at the TPC River Highlands began to swell in volume. Thorbjornsen, a quiet teenager, walked over to ...Read More

CROMWELL, Conn. — For 20-year-old amateur Michael Thorbjornsen, the thought of being in contention on Sunday at the Travelers Championship doesn’t bring along as much pressure as one might think.

CROMWELL, Conn. — Entering Saturday, world No. 15 Xander Schauffele had a five-stroke lead over the next closest competitor — his friend, world No. 6 Patrick Cantlay. Five strokes — tied with Tommy Bolt and Gene ...Read More