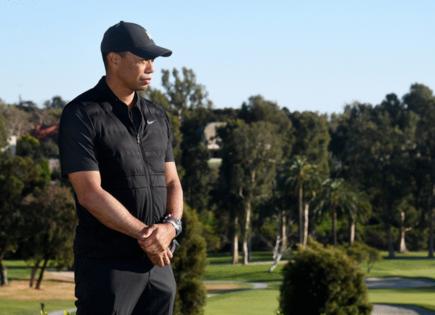 Woods suffered multiple breaks to his right leg after his SUV smashed into a median, careened into a tree and ended up on its side on Feb. 23 in Rolling Hills Estates, Calif.

His vehicle was moving between 84 and 87 miles per hour in a 45 mph zone when it hit the median, and was still going 75 mph when it struck the tree, Los Angeles County Sheriff Alex Villanueva said in April.

Villanueva said an investigation found the primary cause of the rollover wreck was “driving at a speed unsafe for the road conditions and the inability to negotiate the curve of the roadway.”

Woods, who was not charged in the incident, had no recollection of the crash when officials arrived and extracted him from his car, authorities said in April. Officials said Woods didn’t receive preferential treatment due to his celebrity status.

The athlete underwent surgery on his right lower leg and ankle following the crash, and announced several weeks later that he had returned home from a Los Angeles hospital to continue his recovery.

In Sunday’s video, a black sleeve is seen covering most of Woods’ surgically repaired right leg.

The 45-year-old Woods, who was recovering from his fifth back surgery at the time of the crash, has won 15 major tournaments in his career, trailing only Jack Nicklaus, who won 18. Woods’ most recent major title came in 2019, when he won the Masters.

The significant injuries suffered in the crash have caused uncertainty for Woods’ future on the PGA Tour.

In May, Woods declined to comment on a potential return to the tour as he discussed his recovery process.

“I understand more of the rehab processes because of my past injuries, but this was more painful than anything I have ever experienced,” Woods told Golf Digest at the time.

Authorities said in April that Woods was awake but in a state of shock when they arrived to the crash site.

“There was no evidence of braking throughout this collision,” Capt. Jim Powers of the Los Angeles County Sheriff’s Department said. “It is speculated and believed that Tiger Woods inadvertently hit the accelerator instead of the brake pedal.”

SAN DIEGO — In golf, Jon Rahm is the ultimate blue-chip stock. Hefty expectations are backed up by a never-ending string of bankable returns.

He contends along the West Coast, along with the East. He contends in the ...Read More

ST. PETERSBURG, Fla. — He occasionally hears wisecracks from the gallery but learned long ago how to tune them out. When you’ve grown up on the edge of celebrity, the world is filled with background noise.

Former President Donald Trump’s real estate company has settled a dispute with the PGA over the pro golf group’s decision to scrap a marquee tournament that was scheduled to be staged at his New Jersey resort.