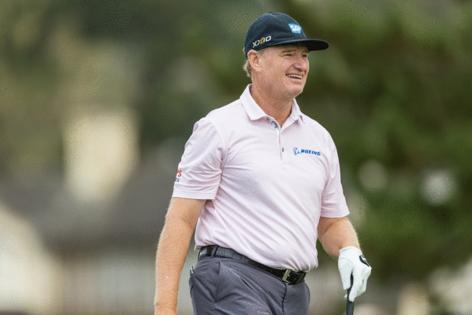 CARY, N.C. — In an ideal world, Ernie Els would have liked to get back to Prestonwood Country Club before Thursday morning, to truly savor the honors and benefits of being defending champion at the SAS Championship. Not only is that a pleasant experience, it's one Els, by his own lament, hasn't enjoyed as often as he would have liked in recent years.

"It's my first day here, back, so I'm really taking it in," Els said Thursday, soaking in the afternoon sun. "It's a good feeling. I haven't won too much in the last 10 years, and again, for almost a year now I haven't won again. So I've got to get going again, and this is giving me good vibes again. I can reminisce of the shots I played and the things I did from last year, so hopefully that will help me a little bit this week. But it's been wonderful to be defending champion again. It hasn't happened that often."

Els, a year ago, won a wild race to the finish in his SAS debut, battling seven other players and the weather. Els finished birdie-birdie to take his first lead of the tournament, slamming in a 40-footer on 18 that, he realized later, probably would have gone 6 or 7 feet past the hole.

He then watched from the clubhouse — turning down the glass of wine Jerry Kelly tried to push upon him, he insists — as Colin Montgomerie missed a putt on 18, avoiding a playoff that probably would have been impossible to play anyway, given the downpour that immediately ensued.

That earned Els the perks and privileges of being a defending champion, including a pro-am group Thursday that included SAS Institute co-founder and CEO Jim Goodnight and former IBM and Red Hat executive Jim Whitehurst, one of those rare moments when Els — with more than $50 million in career earnings — is in a lower tax bracket than his partners.

"Played with the boss himself," Els said.

As always, Els and everyone else are chasing Bernhard Langer, the ageless standard-setter on the senior circuit. Technically 64 in age, if not mind and body, the other players seem to get younger while he stays the same age.

A new wave turns 50 every summer — Els, Jim Furyk and Phil Mickelson (who's not in Cary) last year, Alex Cejka with a splash this year — and Langer continues to outlast them all.

That's going to change eventually, and it's entirely possible weekly duels between Els and Furyk and Kelly could dominate the next decade if they all play a full schedule, no small consideration on a tour where many stars like to pick their spots.

The SAS Championship has traditionally been one of the more popular stops, thanks to the accommodations (the Umstead Hotel) and the smooth-rolling greens and the hospitality (the famous Prestonwood buffet), even for golfers who aren't looking for a last-minute back-door into the tour playoffs that start next week. This week, that group includes Padraig Harrington (who would need a top-10 finish) and Davis Love III (who is three spots out of the top 72).

Advancing isn't an issue for Els, fourth on the money list with two wins to his credit despite going 51 weeks without a win, since last year's pandemic-abbreviated season was appended to this one. In what would be the "normal" 2021 season, he has six top-10s in 19 events but has yet to get over the top. A win wouldn't vault him past Langer on the money list, but it would certainly close the gap.

"I haven't really struck the ball as good as I did last year," Els said. "Just finally, I'm starting to work on some good thoughts. I want to put that together. I'm starting to hit some better shots. The greens are unbelievable, so if I need to play the way I did last year, get the putter going. Everything's been lacking a little bit. My short game hasn't been that sharp. My iron play, everything's been a little bit off. But I feel like it's coming around."

Coming back to a course where he's had success in the very recent past might do the trick. The good vibes certainly can't hurt.

HAVEN, WIS. – On a singles Sunday when he was one of only three players who won a match for Europe, Rory McIlroy fought back tears.