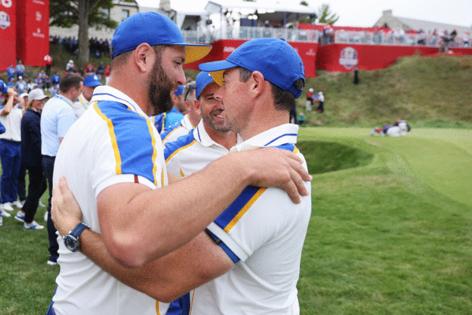 HAVEN, WIS. – On a singles Sunday when he was one of only three players who won a match for Europe, Rory McIlroy fought back tears.

Until Sunday, McIlroy had gone 0-3 in the 43rd Ryder Cup's first two days at Whistling Straits and was benched Saturday morning for the first time since he played his first in 2010.

His one point earned Sunday for beating Olympic champion Xander Schauffele is one of just four points Europe owned when a leaderboard wave of red washed them away.

The U.S. team's 19-9 victory is a modern-day record for points scored since European players joined Great Britain and Ireland in 1979.

"Glad I got a point for Europe, but disappointed I didn't do it sooner," McIlroy said. "Good opportunities Friday and Saturday to sort of lift us out of a hole and I wasn't able to do it. It has been a tough week personally and then obviously for the team as well. ... We've been against it. The American team, they have been really, really good and we haven't been able to put up as much of a fight as we want."

As 40-something Ryder Cup stars Lee Westwood and Ian Poulter did Sunday, McIlroy, too, choked back tears talking about a biennial tournament he called the "best event in golf, bar none."

"I've said naive and stupid things in the past, but this is by far the biggest tournament that we have in golf," McIlroy said. "You look at the crowds. You look at what it means. It's the best. I love being a part of it. I can't wait to be a part of many, many more. …

"I haven't been able to contribute as much as I wanted. No one was more disappointed the way I played than me, but it's still such a great experience to be part of these Ryder Cup teams and this will just fill the fire even more of us in two years' time in Rome."

Schauffele fell behind by three holes by the 11thhole against McIlroy, who was a surprise pick to lead Europe off Sunday with a six-point deficit after the first two days.