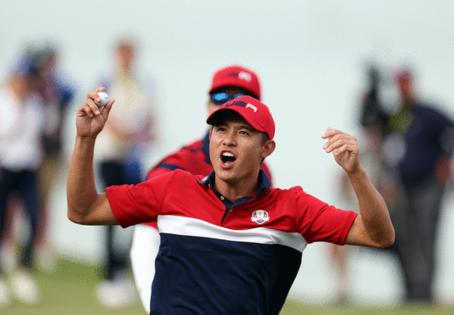 Needing a half-point to push the Americans over the top, Collin Morikawa nearly aced the 222-yard, par-three 17th hole and secured the victory for his team by draining the three-foot putt that remained.

The 24-year-old from La Canada Flintridge went one up with one hole to play, guaranteeing his team the half-point it needed to get to the magic number of 14½ points. He pumped his fist and held his arms aloft as he calmly walked off the 17th green.

On a day when the home team needed only 3½ points to clinch the cup, rookie Scottie Scheffler set the tone by downing Jon Rahm, the world's No. 1 player, who hadn't lost all week.

Scheffler birdied the first four holes to go 4-up, then led by either three or four the rest of the match on his way to a 4-and-3 victory.

"This is definitely different," said Cantlay, a former UCLA standout from Long Beach. "I mean, I woke up this morning and I was trying to tell the guys — this is going to be the next era of the Ryder Cup team for the U.S. side. We have a lot of young guys and I think they are going to be on teams for a long time."

Despite having competitors who were much lower in the average world rankings, Europe had won four of the last five meetings.

But this time, behind a wave of rising American stars, the U.S. proved unstoppable. After the first two days, the Americans enjoyed an 11-5 advantage — and no team had ever overcome a deficit that large.

Although there was a lot of hand-wringing from the Americans about how the long-hitting, puff-chested Bryson DeChambeau would fit in, that polarizing star proved a key component to the victory. He and Scheffler combined to win their four-ball match Saturday, and on Sunday, DeChambeau beat Sergio Garcia to move the U.S. to within a half-point of victory.

"Even though we're all competitors this week," DeChambeau said, "we can all be friends and have amazing unity."

McIlroy, playing in his sixth Ryder Cup, was emotional in a Golf Channel interview after his match, struggling to hold back tears.

"I've never really cried or cared about what I've done as an individual," he said. "I couldn't give a s—." At the end of the interview, he politely added: "Sorry for swearing back then."