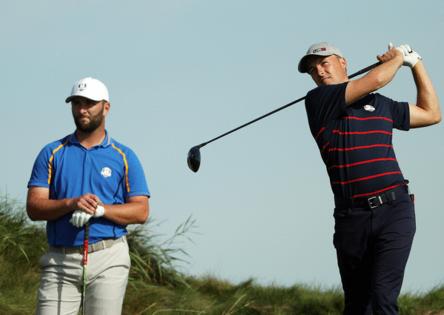 American and world No. 13-ranked Jordan Spieth delivered the high-wire shot of the day at the end of his morning alternate-shot loss with partner Justin Thomas, who left him playing a ball that had fallen off a steep greenside drop-off alongside Lake Michigan on Whistling Straits' 17th hole.

Faced with a wall of grass that towered over him, Spieth jumped, trying to locate the pin.

He lifted one leg high to brace himself against the drop-off, leaned back and slashed a lofted shot within five feet of the pin while he stumbled 20 yards or more down the slope, nearly into the lake.

A moment later, Jon Rahm and Sergio Garcia closed out Spieth, Thomas and the match 3 and 1 before Thomas could putt.

"I'd like to say I don't think I exaggerated the fall," Spieth said. "You know how steep that is. Once I started moving, I was like, `I've got to keep moving until I find a flat spot.' It's one of those shots you practice as a kid for fun. The chances of it going there, you could roll 1,000 balls off the green and it's not going to stay where it was."

World No. 1-ranked Rahm won a point and a half Friday on a day when he was one of the relative few who put up European blue on Whistling Straits' leaderboards.

He and Garcia won a morning alternate-shot match 3 and 1 over Thomas and Spieth. They did so by making birdie on three of four holes after Garcia wasn't conceded a short putt Rahm thought he deserved at the par-4 sixth hole.

"It's all part of the Ryder Cup, right?" Rahm asked. "A lot of time people are going to try to play mind games. In my case, if I have a foot and a half to tie or win holes, I will make it, honestly. It's always a bonus to the see the ball go in the hole and I feel like it did put a bit of extra thought in our mind. I feel like that's when it got in gear."