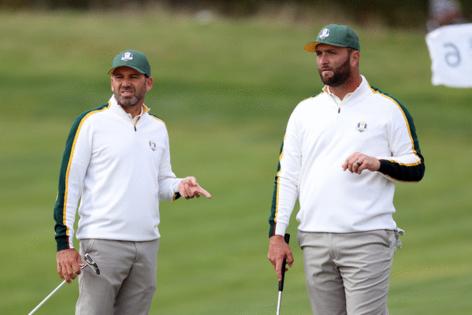 His own world No. 1 Jon Rahm and fellow Spaniard Sergio Garcia against longtime American pals Justin Thomas and Jordan Spieth.

The American pairings were pretty predictable. Europe surprised some with 40-somethings Garcia, Westwood and Poulter all summoned first thing for their experience and savvy. U.S. captain Steve Stricker said he didn't try to anticipate Europe's lineup, but he figured Rahm and McIlroy would be first and fourth in either order.

European players' golf bags each carry a number given to them after Harrington showed a motivational video entitled "Make It Count." It informed them each is one of just 164 to play for Europe in a Ryder Cup.

That's far fewer than the 570 people who have been in space, the 5,780 who have climbed Mount Everest or even the 225 men who have won a golf major.