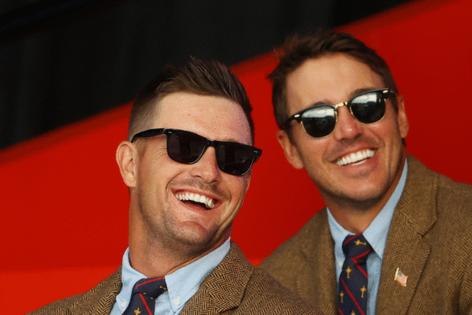 On Thursday, Steve Stricker avoided such temptations just to see what might happen if he put Bryson DeChambeau and Brooks Koepka together when alternate-shot matches tee off early Friday morning at Whistling Straits.

Koepka teams with 2017 Presidents Cup partner Daniel Berger in the third match against 11-time Ryder Cupper Lee Westwood and Matt Fitzpatrick. DeChambeau is one of four U.S. players not playing the morning session.

Years later, Sutton said he hoped to teach his superstars something about teamwork. If they left better friends, all the better after a competition the Americans resoundingly lost on their home turf at Oakland Hills.

Stricker has called an icy relationship between big hitters and major champs Koepka and DeChambeau — fueled by social-media trolling — a "non-issue for me and the team." He said they addressed any issues or non-issues over dinner at the recent Tour Championship and this week at Whistling Straits.

"I've had conversations with them both and they have assured me it's not going to be an issue," Stricker said. "I have no worries whatsoever."

The two have spatted on social media on and off since 2019, on everything from the methodical, scientific DeChambeau's slow play and clattering metal spikes to Koepka's physique and abs, or lack thereof.

Like both players' words this week, it's intended to say there's no schism to see here on an American team known historically for its individualism.

"A lot of this social media stuff has definitely been driven by a lot of external factors, not necessarily us two," DeChambeau said on Tuesday. "We had great conversations Tour Championship week and this week as well. I sat down and had dinner with him last night and it was fine."

PGA Tour commissioner Jay Monahan a month ago announced disrespectful fans who have joined in the feud by shouting "Brooksie" at DeChambeau all summer will be ejected.

"There are times when it's not comfortable, but there's also times where it fuels me,"DeChambeau said. "I think this week is going to be an amazing example of it and it's going to be fun to have the crowd behind us, pump them up and show them what I can hopefully do. And what we can do as a team more importantly."

DeChambeau spoke to media members on Tuesday for the first time in weeks.

"I'm not going to make this about me again," DeChambeau said. "This is about a team event. I've got a brass chest. I've taken a lot of heat. But I'm OK with it and I understand I'm in the place where I'm at and it's going to be that way moving forward."

Koepka on Thursday declared himself healthy from a wrist injury sustained nearly a month ago, but didn't quite concur with Stricker, who called Koepka "100 percent health-wise."

Then he said he'll play 36 holes a day over tumbling Whistling Straits if needed.

"I feel fine," Koepka said. "I feel as good as I've felt in a long time. I'm ready to go as much or as little as they want."

He called the Ryder Cup and its match-play team format different, hectic and a "bit odd" in a July interview with Golf Digest. The 2008 U.S. team captain Paul Azinger last week said Koepka should relinquish his spot if he doesn't love the Ryder Cup. Koepka is 4-3-1 in two Ryder Cups.

"I never said it was negative, y'all spun it that way," Koepka told reporters Thursday in a media-room interview. "I just said it was different. That doesn't mean it's bad. I enjoy it. I think it's a lot of fun to play. I wouldn't be nervous on that first tee if I didn't care."

"He assures me he is 100 percent all-in on this team and whatever he needs to do for this team to become the winner," Stricker said. "It has been good talks and he's ready to get down and start playing."