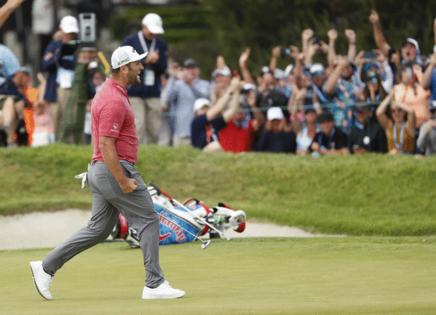 Start with the 150 hours of total television and digital coverage that reached 177 countries and territories, including 25 million viewers in the U.S. alone — a postcard-perfect glamour shot for the region.

Consider the nearly $3.5 million the United States Golf Association paid the city to cover costs of the bonkers tournament won by Jon Rahm in June at Torrey Pines.

Or rewind to Sunday night, hours after the cheers for Rahm ebbed.

The city's contract with the USGA required the course to remain closed the first two days of the following week, building in mulligans for weather delays or extended play. When tee sheets for Wednesday popped up online, it was like tossing a sirloin steak into a shark tank.

"One of our supervisors watched it," said Scott Bentley, deputy director of the city's golf division. "It took 45 seconds to fill the entire tee sheet for the day. We're talking 6:15 in the morning until 6 at night."

The USGA paid the city $3,469,256.87, according to a public-records request by the San Diego Union-Tribune.

That came in the form of six rent checks to cover, in part, the closure of the South Course in advance of the tournament and the North Course as it morphed into a driving range, media center, parking lot and more. The USGA also paid $450,000 to offset public safety work and permitting.

Though the city covered its expenses and more, the hospitality portion fell well below projections. Natasha Collura, executive director of the city's special events group, indicated in a June 22 email that an inquiry was sent to the USGA because the money was "not nearly the level anticipated."