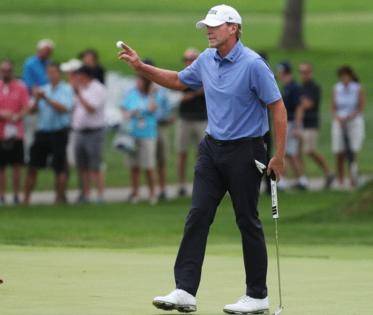 A Ryder Cup without fans is worthless to anyone not named Bryson DeChambeau, who might prefer a return to COVID-19 empty galleries given that a fortnight hence "Brooksie" could make history by becoming the first U.S. player to get jeered by his own countrymen.

DeChambeau births hecklers like the Duggars birth humans. Add the Ryder Cup, a maternity ward of meanness unlike anything in golf, and the atmosphere at Whistling Straits beginning Sept. 24 would make Dave Chappelle blush.

That is exactly why the PGA of America postponed the biennial event from 2020 to 2021. Without fans, the Ryder Cup would be a snoozer.

"The players didn't want the Ryder Cup without fans, because the fans make it," said Dave Shedloski, a Golf Digest contributor based in Columbus who will be making his 12th appearance at the event. "If the Euros can get under Bryson's skin, let them."

That shouldn't be too hard. DeChambeau increasingly shows signs of being annoyed by overserved fans, which prompted a sympathetic PGA Tour to issue a warning to mouthy spectators: you will be removed for raining ridicule on any player's 18-hole parade.

But such threats hold no sway at the Ryder Cup, over which the tour has little jurisdiction.

"Not a lot of behavioral police will be out there," Shedloski said, adding that Golf Digest once ran a campaign called "Be Nice to Monty," which sought to soften fans' heckling of Scottish golfer Colin Montgomerie. "The idea was to bring a little more decorum, but that's not what the Ryder Cup is. It's a football game, or better yet a rugby match. It's a verbal scrum city."

Who knows if DeChambeau blows a fuse when European fans, and undoubtedly some Yanks, pelt him with "Brooksie," a taunt meant as a non-flattering comparison to DeChambeau antagonist Brooks Koepka?

More clear is that DeChambeau's teammates won't get caught up in the fireworks. United States captain Steve Stricker made sure of that on Wednesday when he announced his six at-large picks, four of them Ryder Cup rookies, to go with the six automatic qualifiers.

ATLANTA — Brooks Koepka was forced to withdraw from the Tour Championship after he injured his left wrist during the third round Saturday.

Koepka hit his approach shot on No. 10 from the rough near a tree off the right ...Read More

ATLANTA — On Friday at the Tour Championship, the leaders seemed to be waiting around for an Amazon delivery of inspiration. The last twosome out, Patrick Cantlay and Jon Rahm, both were coloring their scorecards in ...Read More