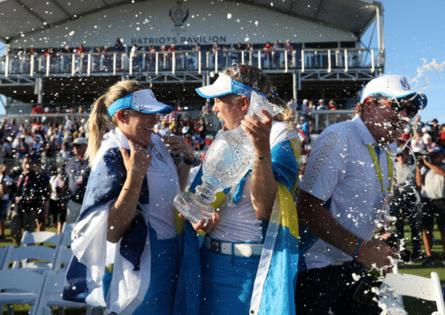 It's a cliché that couldn't have been more apropos on Monday afternoon — or the entire week, for that matter — at Inverness Club as the 17th Solheim Cup matches were concluding.

Team Europe, which entered play on Saturday as a heavy underdog to Team USA, put its foot on the gas early, winning three of the first five singles matches and earning a half point in another before hanging on late as the Americans did their best to rally.

In the end, Team Europe earned a 15-13 victory, defending the Cup for just the second time in the history of the matches. It was also Europe's second victory in the last three matches conducted on American soil after an 18-10 victory in 2013 at Colorado Golf Club.

"Just an amazing team actually," said Catriona Matthew, the first European captain to win the Cup twice. "They came out here and performed. We got off to a great start this morning. ... I'm kind of lost for words actually at the moment."

The clinching shot came when Matilda Castren drained a par putt from roughly 10 feet on No. 18, a shot that guaranteed Team Europe 14 points and the ability to retain the cup. Moments later, when Danielle Kang's par putt leaked right on No. 15 in her match with Emily Kristine Pedersen, the Europeans had won the cup outright.

"I mean, it's hard to put it into words right now. I think I'm still shaking," Castren said. "I just knew I was looking at the board and I knew it was going to be an important putt, and I wanted to make it.

"I'm just so happy right now, and I'm not sure what the final scores are, but I'm just ... yeah, a lot of emotions right now."

The slow start for Americans proved to be too much to overcome as they were unable to put a dent in the two-shot hole they were in when the day began.

"I was hoping to see a lot of red in the beginning just to kind of put it up on the board for everyone to see, but it is what it is," Team USA captain Pat Hurst said. "They played hard, they played with heart, and that's what we were asking for.

ATLANTA — Brooks Koepka was forced to withdraw from the Tour Championship after he injured his left wrist during the third round Saturday.

Koepka hit his approach shot on No. 10 from the rough near a tree off the right ...Read More

ATLANTA — On Friday at the Tour Championship, the leaders seemed to be waiting around for an Amazon delivery of inspiration. The last twosome out, Patrick Cantlay and Jon Rahm, both were coloring their scorecards in ...Read More

ATLANTA — Never know when you might get ambushed by an old fond memory, like that of a first kiss or a first car or of Jordan Spieth putting together an unspectacular, but at least solid, round at East Lake.