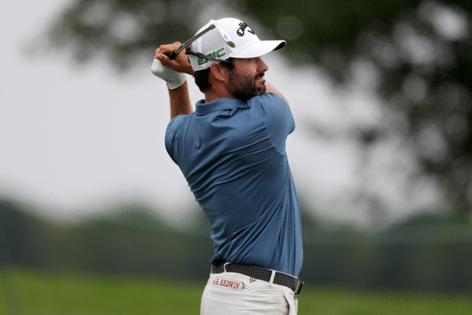 BLAINE, Minn. — The inaugural 3M Open featured an unforgettable finish two years ago that foreshadowed who scientific Bryson DeChambeau could become and introduced newcomers Matthew Wolff and Collin Morikawa in a big way.

Wolff's eagle on the par-5 18th trumped DeChambeau's eagle just in front of him. Wolff won by a stroke, DeChambeau and Morikawa tied for second.

How many people would know that?

And yet here Hadwin is, in contention at TPC Twin Cities again. This time he's the 3M Open co-second round leader with Ryan Armour at 10 under par after each shot a 7-under-65 on a steaming, windy, overcast Friday afternoon.

Sixteen players are within three shots of the co-leaders.

Armour is 45 years old and a 2017 PGA Tour winner who birdied four consecutive holes on his back nine and one more at No. 18. He shot a 31 on those final nine holes to pass morning leaders Bo Hoag, Chez Reavie, Jhonattan Vegas and Roger Sloan and tie Hadwin.

"I can't change much, I am who I am," Armour said. "I'm going to try and hit fairways and hit it on the green. I can't overpower anything out here the way some of the young kids do. I've just got to go about my way, not their way."

BLAINE, Minn. — The British Open ended on July 15 and the FedEx Cup playoffs start with the Northern Trust on Aug. 19. There are two weekly PGA Tour events paying full purses during that 35-day gap.

The first is the ...Read More