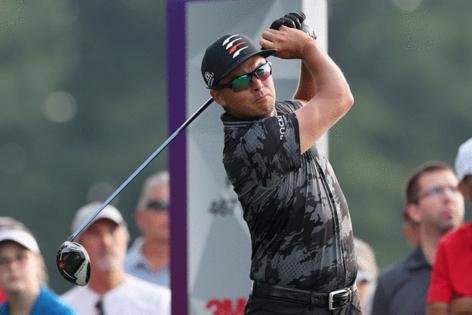 That tied him with former Minnesotan Troy Merritt and three-time PGA Tour winner Jhonattan Vegas, one shot ahead of Scott Stallings and Adam Schenk.

Hours after Fowler and Merritt finished their weather-delayed morning round, Vegas tied for the lead in Thursday's last light. He did so with a birdie 4 on the par-5 18th hole after he hit his approach shot through the gathering darkness and either into or over a corporate tent behind the green.

Vegas said he and his caddie "messed up" the distance to the green trying to play fast on a second shot that could have sent up a tournament-leading eagle 3. Vegas, his caddie, playing partners, rules officials, spectators and a photographer all searched for the ball, which was eventually was found at the back of the tent.

He received a free drop from in front of the tenting and got up and down after 9 p.m.

"It was a little bit of nightmare right at the end, especially at the end of a good round," he said.

Play was suspended because of darkness with 11 players still on the course.

Ranked No. 124 in FedExCup rankings that determine the 125-man playoff field, Fowler drove the ball better, struck his iron shots better, got up-and-down when he necessary and made some putts. That's everything he didn't do when he shot 72 and 75 in Friday and Saturday rounds last week at Royal St. George's.

"I drove it poorly Friday and Saturday," he said slyly. "It was not my driver's fault." Then Fowler paused for effect.