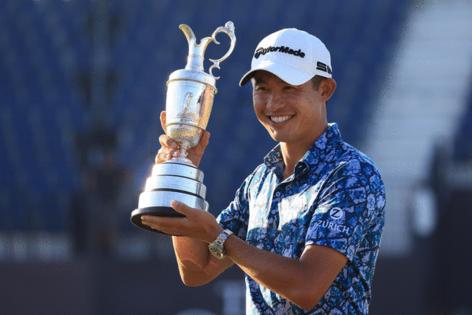 Morikawa, a graduate of La Cañada High, shot a bogey-free, four-under-par 66 in the final round of the British Open at Royal St. George’s to secure a two-shot victory over Jordan Spieth. Eleven months earlier, Morikawa won the PGA Championship at Harding Park.

“This is by far one of the best moments of my life,” said Morikawa, 24, who joins Tiger Woods as the only players to win both the British Open and PGA before turning 25.

It was the first British Open in two years, as last year’s tournament was canceled amid the COVID-19 pandemic. In the aftermath of lifting the Claret Jug, Morikawa had a difficult time wrapping his mind around the idea of making golf history.

“At 24 years old, it’s so hard to look back at the two short years that I have been a pro and see what I’ve done, because I want more,” said Morikawa, a three-time All-American at Cal who reached No. 1 in the world rankings for amateurs. “I love it, and I want to teach myself to embrace it a little more, maybe spend a few extra days and sit back and drink out of this.”

Morikawa, the first player since Bobby Jones in 1926 to win two majors in eight or fewer starts, birdied the seventh, eighth and ninth holes to pull away from Louis Oosthuizen, who finished second at last month’s U.S. Open and was angling to clinch a second British Open victory with a wire-to-wire performance. Morikawa finished the tournament at 15-under 265.

Although Oosthuizen has the lowest putting average on tour, it was Morikawa who was absolutely scorching on the greens Sunday, calling it one of his best performances ever, especially inside of 10 feet.

“I felt it was as solid as it’s going to get,” said Morikawa, who began the week ranked 128th in putting. “I don’t think I really missed many from that distance. Especially in a major. I think in a major on a Sunday in contention, I wasn’t thinking about anything other than making a putt.