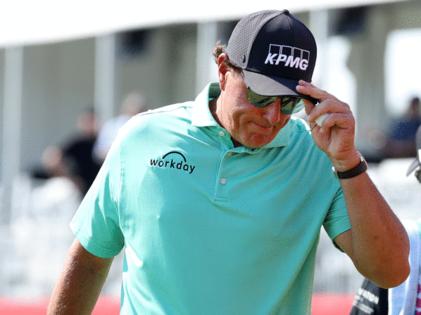 Whatever the six-time major champion decides, it'll be based on his schedule, and not his extended beef with the media that took over the headlines during Rocket Mortgage Classic week earlier this month.

Jason Langwell, tournament director, told The Detroit News this week that he had a conversation with Mickelson as the fan-favorite left-hander made his way to his car after finishing his Sunday round.

"And he couldn't have been more complimentary of the golf course and the experience," Langwell said this week. "I think his return ... the factors of his return will be no different than they would have been had there not been an (article): Does it fit my schedule.

"Based on that (conversation), if he doesn't come back, it won't be because of that (article)."

Mickelson, 51, played a tournament in Michigan for the first time since the 2008 PGA Championship, and finished tied for 74th, at 3 under.

But he did what he was brought here to do: sell tickets. Mickelson committed to the tournament in late May, making up for having to bail on 2020 because of the shuffled schedule amid COVID-19. The day he committed, Rocket Mortgage Classic officials saw a significant spike in ticket interest, as much as 3-4 times.

That was significant, given the Rocket only was given about a month to sell tickets in 2021, because the state didn't announce the lifting of outdoor capacity restrictions until late May, to start June 1.

Despite that short window — there was three months of lead-up ticket sales in the inaugural year, 2019 (there were no fans in 2020) — attendance finished on par with 2019, Langwell said. Despite several days of poor weather. The PGA Tour has always declined to reveal specific attendance numbers, but it's believed the first Rocket Mortgage Classic drew at least 40,000, and possibly as many as 50,000 spectators.

If the 2021 Rocket came close to that, it was achieved despite limited ticket sales for Tuesday's practice round and AREA 3-1-3 celebrity scramble. Wednesday through Sunday were the only days available for general-admission tickets.