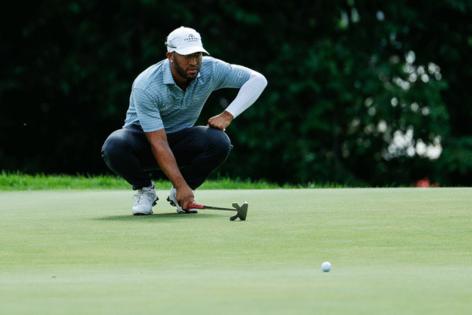 The Flint native has been mistaken for a caddie multiple times, but he doesn't let it get to him. Ten years into his professional career, Mack is trying to become the fifth Black full-time golfer on the PGA Tour this season, and recent sponsor's exemptions have aided him on this journey.

But golf fans will notice something else about Mack: the sleeve he wears on his left arm. On social media, he uses #Mack3Sleeve to promote his look, which doesn't provide any additional benefits to his golf game but rather pays homage to his second favorite sport — basketball.

"I grew up liking basketball, playing basketball, and liking Allen Iverson, so thought I would just bring it to the golf course," Mack said after Sunday's final round at the Rocket Mortgage Classic at the Detroit Golf Club in which he shot a 1-under-par 71. "(I liked) just everything about him. He was kind of like me, short, could shoot, so I just kind of went with him."

In his second PGA Tour event this season, Mack's first-round shooting 4-under-par 68 — which was split over two days because of Thursday's weather delay — propelled him to make his first PGA Tour cut. His relatives celebrated him by creating custom white Willie Mack T-shirts to wear while following him throughout the tournament.

"I think the first round, just getting out there and shooting 4-under, it was a good start, but just making the cut and being able to play on the weekend in front of my friends and family is exciting," Mack said.

Mack concluded his first appearance at the Rocket Mortgage Classic with a tournament total of 284, 4 under par and a tie for 71st place.

"I think just my overall game was there. I kind of just burned a lot of edges this week. I think my driver and my putting was probably the best," Mack said Sunday. "I want to tee it up again. Luckily, I got into John Deere (Classic in Silvis, Illinois) next week, so hopefully, I can take this momentum and play well next week,"

Playing on another sponsor's exemption, Mack has, ahem, the answer, for playing well next week.

"I need to work on a couple wedge shots, but just getting my putting down. I played that course a couple times, it's kind of short," he said. "Hopefully it doesn't rain so it won't play super long. (I) just got to make a couple more putts and hopefully, they'll fall next week."

Iverson dominated the NBA in the early 2000s, and his signature braids and arm sleeve started fashion trends across sports. It also captivated Mack, who was excited to see his favorite player join with the Detroit Pistons for the 2008-09 season.

Mack's love for basketball goes back to his childhood. He played basketball throughout middle school and midway through his high school career at Grand Blanc, but with a height of 5 feet 7, his decision to focus quit basketball and focus on golf wasn't a hard one.

"I was way better at golf, so I think I picked the right sport," the 32-year-old said with a smile.