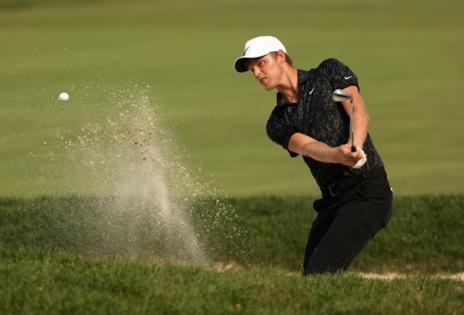 Hard-charging Cam Davis of Australia made par on the signature hole of AREA 3-1-3 at Detroit Golf Club to put an end to the PGA Tour's second consecutive sudden-death playoff, and to earn his first career win on the PGA Tour. Troy Merritt, co-leader after 54 holes, missed a 6-footer for par, just shy of his third victory.

It all concluded on the fifth playoff hole — in this union town, what's a little overtime on a holiday? — a week after Harris English went eight to beat Kramer Hickok at the Travelers Championship in Connecticut.

"It's still so surreal for me," said Davis, who entered the final round a shot back. "I've been in some good positions before, but to play the golf that I played coming down the stretch was just awesome.

"But this has been awesome. I'm really, really happy with where I sit right now."

Why wouldn't he be? He was sitting next to the red, black and silver championship trophy.

Joaquin Niemann, who shared the 54-hole lead with Merritt, didn't make a bogey through 72 holes of regulation. But he bogeyed the first playoff hole, the par-4 18th, and was eliminated.

The playoff went from 18 to 15 to 16 to 14 and back to 15, as tournament officials made a last-minute audible to keep the action in AREA 3-1-3 — so that fans wouldn't have to hoof it all over the grounds. They did enough mad-dashing after each playoff hole, to get in position for the next, scampering down the rough lines.