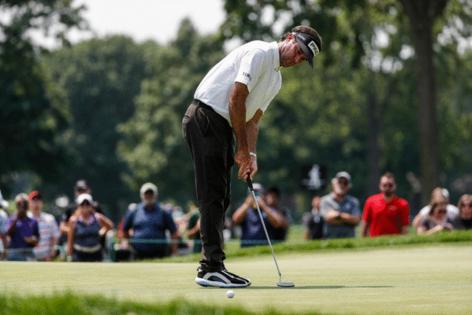 And friends, I’m here to tell you something I believe with all my heart. In its third year of existence, the Rocket Mortgage Classic at Detroit Golf Club felt like a major.

It certainly wasn’t because of the difficulty of the course, the scores or the quality of the field. Mostly it felt like a major because of two players and the much-needed buzz they brought to the tournament.

You know exactly who I’m talking about: Phil Mickelson and Bryson DeChambeau.

Mickelson achieved the kind of legendary status we normally reserve for the likes of Paul Bunyan and Bigfoot, mythical heroes whose tales are so tall you almost can’t believe them.

But he made us believe. He made us care. Through his feud with the Detroit News over an article about his gambling, Mickelson made Detroit Golf Club vibrate with tension all week.

Former Michigan State golfer Ryan Brehm played four groups behind Mickelson the first two days and could sense the excitement ahead of him.

“We knew what they were doing the whole time,” Brehm said, “and it was kind of fun to be a part of that sea of people.”

Mickelson kept us enthralled with his tweets and comments. He hates the paper. He loves the fans. He’s not coming back. But maybe he is. The saga had more twists and turns than a Taylor Swift breakup song.

And it was all good for business. The excitement was palpable among the fans, and even in the media center, where sportswriters usually reserve their strongest emotions for the unveiling of dessert offerings.