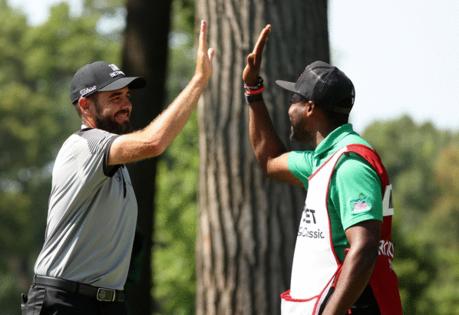 Merritt, an Iowan with two PGA Tour wins to his credit, pulled a 5 iron, drew it slightly to a front left pin and watched as the ball one-hopped and disappeared into the cup for an ace, delighting a crowd that had been rather quiet since the likes of Phil Mickelson and Rickie Fowler finished their rounds hours earlier.

Already the leader by one, that extended it to three and by day's end Merritt was tied with Chile's Joaquin Niemann at 14 under entering Sunday's closing round.

It was Merritt's first ace on the PGA Tour, the second this week in Detroit, and the fourth in the tournament's three-year history.

"First and foremost, it's awesome to have the fans back out here whooping and hollering the good shots, commiserating with the bad shots and even hearing some of the comments you probably don't want to hear," said Merritt, who finished tied for eighth last year, when there were no fans. "It was fantastic, obviously, to give them something to yell about."

In all, 24 players were to enter the final round within five shots of the lead, including Fowler, the fan favorite who was at 9 under after a 68. Two-time Masters champion Bubba Watson (67) was at 8 under.

Hot conditions are expected Sunday on a course that already was finally starting to firm up Saturday after a week of heavy rain. The course played to an average of nearly two strokes under par Saturday, more than a shot easier than Friday, and Sunday figures to be a shootout, too. There've been multiple 63s in this event. Something even lower than that isn't out of the question.

"Quite a few birdies," Lebioda said, of his strategy for Sunday, when he'll chase his first PGA Tour win.