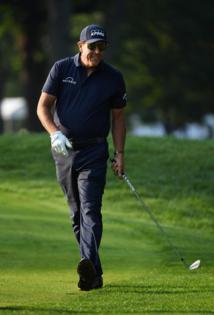 That's because Phil Mickelson was ahead of him, the first man out — and playing by himself, putting the gallery's calves to the test as he played without a marker, and in a speedy two hours, 45 minutes.

"Once he finished playing, my crowd picked up a little bit," Fowler said with a big grin, under a tightly-cropped mustache. "Nice to see that I'm maybe second to Phil (in popularity) in the field, maybe third. I don't know."

This much Fowler does know: Mickelson, whether he's playing well (as he did Thursday) or not (like Friday and Saturday), is the biggest draw on the PGA Tour with Tiger Woods out. Even at 51.

Rocket Mortgage Classic officials said before tournament week that when Mickelson committed in late May, there was a significant surge in ticket interest — perhaps as much as three times or four times in a typical day a month out from the tournament — and Mickelson continued to sell tickets upon his arrival, getting Detroit golf fans largely on his side in a beef with The Detroit News over a story published this week that detailed his gambling ties to a mob-connected Grosse Pointe Park bookie.

Mickelson, who was not accused of any wrongdoing in the story and who continued to tweet about his beef after the third round, said Thursday he wouldn't return to Detroit after 2021. Then he played Friday in front of a massive and raucous gallery, serenaded by chants of "Come back, Phil." There were many anti-Detroit News catcalls. Mickelson met most of them with his trademark thumbs-up.

Then, after Friday's round, he said he would, indeed, come back in 2022, if 50,000 fans signed an online petition — and that those 50,000 fans committed to performing one random act of kindess. Mickelson performed the first act of kindness, donating $100,000 to the Detroit Children's Foundation.

"Having Phil here, I love that he came and wanted to support the tournament," said Fowler, who played with Mickelson the first two days and rallied the crowd to keep chanting, waving his arms, as he approached the first tee Friday. Fowler is a Rocket Mortgage pitchman who serves as this tournament's unofficial host.

"He's arguably one of the biggest draws there is in our game still, so wherever he goes, whichever town he shows up in, people are going to come watch.

"Definitely appreciative that he chose to come to Detroit, and hopefully we can get him back."

Mickelson, whose galleries have grown significantly each day of the tournament, shot par-72 for a second consecutive day Saturday and was at 3 under through three rounds. There was an outside chance he'd play with Flint's Willie Mack III, who also was at 3 under after shooting a third-round 72, in Sunday's final round, but it didn't shake out that way. Mickelson will tee off at 8:10 a.m. Sunday and play alongside Will Zalatoris, just behind Mack and Anirban Lahiri.

Mickelson is a 45-time winner and six-time major winner on the PGA Tour, and this is his first time playing a sanctioned tournament in Michigan since the 2008 PGA Championship at Oakland Hills.