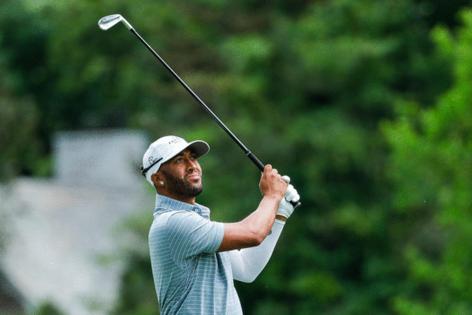 Mack, a Flint native who has been grinding mostly on mini-tours since leaving college more than a decade ago, is 3 under through two rounds. He made the cut right on the number.

Last place at the Rocket Mortgage Classic will take home more than $10,000, no small thing for Mack, who has been open this year about his struggles while pursuing his dream — he has slept in his car, and has borrowed $10 or $20 at a time from his dad just to he could eat McDonald's.

His dad, Willie Mack Sr., was in the gallery following through Friday's 1-over-73, which followed an opening-round 68 that also was concluded Friday because play was suspended by darkness Thursday.

"It would be good," Mack said of making the cut at Detroit Golf Club; when he finished Friday. "Just having that experience and confidence going into next week, to be able to play on the weekend in my hometown would be amazing."

Mack, 32, is playing in this third PGA Tour ever — all this season. He also will play in next week's John Deere Classic. All four appearances have been on sponsor's exemption; Rocket Mortgage gave him one, allowing Mack to skip the inaugural John Shippen tournament that was to give an exemption into week's tournament.

He got off to a fine start Thursday at a course he played a lot growing up, in what's now called the Michigan Medal Play tournament.

But a three-plus-hour rain delay set tee times back Thursday, and he didn't finish, meaning he had to be back at the course around 6 a.m. Friday. He wrapped up a 68, had 25 minutes to relax, then got going again.

Mack figured he got about three hours of sleep before arriving at the course Friday.

"I'm tired," he said. "But I think adrenaline kept me going and hopefully it can hold up for the next two days."