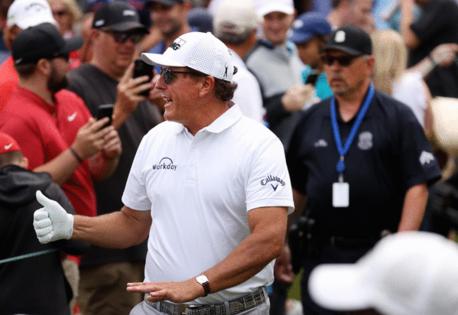 Mickelson, who's been in the headlines this week for reasons besides birdies and bogeys, said Friday that he felt so much love from the fans at Detroit Golf Club this week, that he now plans to return to the Rocket Mortgage Classic for 2022. He said Thursday he would not because of a Detroit News report on past gambling activities that he felt was unfair, inappropriate and ill-timed.

But there's one catch.

A former Detroit sports-talk radio producer Thursday created a petition to convince Mickelson to come back to Detroit. Mickelson said if that petition meets the 50,000-signature goal, and that each of the 50,000 signers agreed to do "one random act of kindness for another member of the community," then he will tee it up again when the PGA Tour returns to Detroit next summer.

"If the members of the community will come together," Mickelson said, "I'd love to be back."

Mickelson, 51, a six-time major champion who won the PGA Championship earlier this year, was not pleased with The News' report published Tuesday detailing how he once was cheated out of $500,000 in bets by a mob-connected Grosse Pointe Park bookie. The gambling activity took place more than two decades ago, but transcripts of a deposition detailing Mickelson's connection were just discovered late last month.

Mickelson was not accused in The News article of any wrongdoing, and his lawyer told ESPN that the report was accurate but questioned the timing of publication ahead of the Rocket Mortgage Classic.