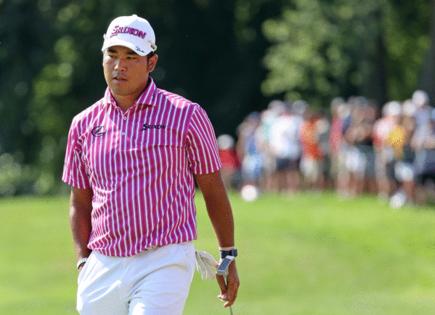 Hideki Matsuyama, the reigning Masters champion, tested positive for COVID-19 and was forced to withdraw from the Rocket Mortgage Classic just minutes before his second-round tee time at Detroit Golf Club.

His playing partners, Phil Mickelson and Rickie Fowler, carried on as a twosome.

"It's disappointing to receive this news," Matsuyama said in a statement released through PGA Tour communications. "I will take all the necessary precautions to ensure the health and safety of all others.

"I appreciate and thank everyone for their concerns in advance.

"I look forward to a full recovery and returning to competition as soon as possible."

Matsuyama, 29, ranked 18th in the world golf rankings, is a six-time winner on the PGA Tour, including his Masters triumph in April that broke a four-year victory drought.

He has played in each Rocket Mortgage Classic, and he shot an opening-round 70 on Thursday morning. He was 4 under late in his round, but a late double bogey was costly.

The PGA Tour continues to regularly test players who aren't fully vaccinated. Jon Rahm was partially vaccinated when he tested positive and had to WD while leading the Memorial earlier this year.

Matsuyama is preparing to represent his home country, Japan, in the Tokyo Olympics later this month.