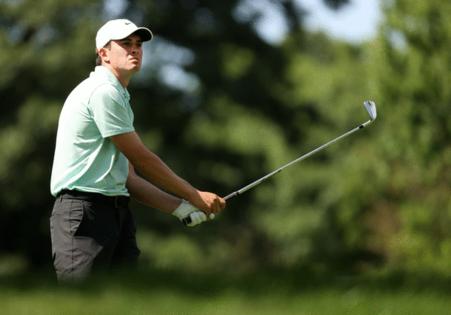 DETROIT — On a supremely soggy day at Detroit Golf Club, which has been pummeled by heavy rains nearly every day since last weekend, it was a wet-behind-the-ears pro who poured in putt after putt, birdie after birdie, to take the lead on Day 1 of the PGA Tour's third annual Rocket Mortgage Classic.

Davis Thompson, fresh off a decorated collegiate career at Georgia and playing in this event on a sponsor's exemption, fired a 9-under 63, sandwiched around a three-plus-hour rain delay, for a two-stroke advantage on Joaquin Niemann, Brandon Hagy and Tom Lewis on Thursday.

Two more were three shots back, and a whole host of golfers were four back at 5 under, including former No. 1-ranked player in the world Jason Day, as well as last year's runner-up and third-place finishers here, Matthew Wolff and Kevin Kisner, respectively, before play was suspended by darkness at 9 p.m.

The 63 tied the lowest round shot in competition for Thompson, who in March was the No. 1-ranked amateur golfer in the world. Now, he's a PGA Tour leader. How does that sound?

"Sounds good on Sunday," Thompson said with a grin. "It's only Thursday. I know I've got a long way to go.

"I'm just going to try to do the same thing tomorrow."

The 63 also matches the low round in the short Rocket Mortgage Classic history, with 2019 champion Nate Lashley (who did it twice) and J.T. Poston, who also shot his in 2019.

Thompson started strong, with two birdies on the first two holes, including a 4 iron to 21 inches at the 233-yard, par-3 11th hole, and shot an opening-nine 31.

He finished nearly as strong as he started, with birdies on two of his last three holes, wrapping up his round after a lengthy rain delay. Heavy rains came shortly after noon, and play didn't resume until 3:30 p.m. Twenty-seven players didn't complete their first round, including Flint's Willie Mack III, who was 3 under through 15 holes when play was called — the best score among the four Michigan men in the field.

Thompson, 22, did his best to stretch and stay loose, and most importantly maintain focus, during the delay.

"I mean, especially today," said Thompson, only playing his seventh PGA Tour tournament, and just his third as a professional. "I looked at my phone and some friends were texting me. I just tried to block all that out and focus on finishing strong, and I was able to do that today, which was huge."

Said Traverse City's Ryan Brehm, a Michigan State alum who shot a 1-under 71 playing in Thompson's group: "It was a bunch of strikes and gutters out there today. ... I was just watching Davis pour them all in."

Thompson made his pro debut at the Palmetto Championship in mid-June, finishing tied for 35th, and then played the Travelers last week, when he missed the cut.

After emailing several tournament directors as his collegiate career was coming to a close, Thompson found out he would receive one of the four Rocket Mortgage Classic sponsor's exemptions in late May.

And on Thursday, he was a steady force — that's a strength of his; he hit all but one green in regulation, and could've gone even lower, had he not parred two of the par 5s — on a day of drama on the grounds of the historic golf club. Phil Mickelson, the biggest draw in golf with Tiger Woods sidelined by injury, made three birdies in a row on his back nine to shoot a 3-under 69, then confirmed his tweets during the rain delay that he wouldn't return to play in Detroit because he was upset over the timing of a Detroit News report about being cheated out of half-million dollars by a Metro Detroit bookie two decades ago.

"I don't see me coming back," Mickelson said. "Not that I don't love the people here."

On his way to a three-shot victory over Matthew Wolff at the Rocket Mortgage Classic, DeChambeau bombed his way around the Donald Ross layout, ...Read More

Here's betting he's about to find his second wind.

Fresh off his best finish on the PGA Tour — he lost to Harris English in a marathon, eight-hole ...Read More