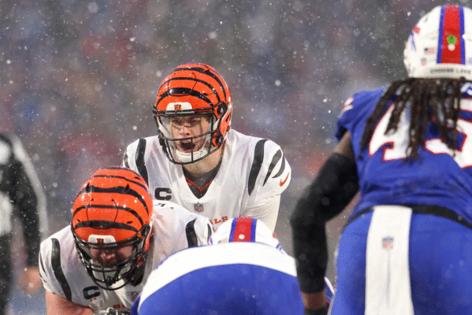 LEXINGTON, Ky. — The sports adage says that it’s hard for any good team to beat another good team three straight times. So what about four? That’s the question for Sunday’s AFC Championship Game in Kansas City, Mo.

The Cincinnati Bengals have defeated the mighty Chiefs three times over the past two seasons. Joe Burrow and Company knocked off Kansas City, 34-31, in Cincinnati on Jan. 2 last season, then four weeks later repeated the trick in the AFC title game, edging Patrick Mahomes and Company, 27-24 in overtime.

Will history repeat? The Bengals clipped the Chiefs, 27-24, at Paycor Stadium on Dec. 4. Now the two teams meet again Sunday at 6:30 p.m at Arrowhead Stadium on CBS for a berth in Super Bowl LVII on Feb. 12 in Glendale, Ariz.

Can the Bengals win? Of course they can. Cincinnati is the better team. Since starting the season 0-2, the Bengals have won 14 of 16 games, including the last 10 in a row. Their offense is humming, their stellar defense is finally earning recognition, and their chip-on-the-shoulder attitude has served them well.

In snowy Buffalo last Sunday, the Bengals dominated. They scored touchdowns on each of their first two drives, including a six-play, 79-yard march to start the game. A 28-yard Burrow to Ja’Marr Chase TD pass capped that possession. Second drive, the Bengals covered 72 yards in 10 plays with Burrow finding tight end Hayden Hurst for a 15-yard score and a quick 14-0 lead.

Buffalo never recovered. Josh Allen’s longest run of the day was 6 yards. The Bills’ offense reached the Red Zone just three times, settling for a touchdown, a field goal and a turnover on downs. Meanwhile, playing with a makeshift offensive line because of injuries, Cincinnati rushed for 172 yards on 34 carries in a 27-10 win.

It might not be quite time to move Joe Burrow ahead of Patrick Mahomes in the NFL quarterback rankings, but the gap has narrowed. Burrow has five playoff victories in his first three seasons. Only Ben Roethlisberger and Russell Wilson can say that. Burrow is an accurate passer who has learned to maneuver in an NFL pocket. He also oozes a cool confidence — or cockiness — that radiates throughout his team.

Besides, Mahomes is hurt. The Chiefs QB suffered a high ankle sprain in Kansas City’s 27-20 win over Jacksonville last Saturday. Once Andy Reid granted Mahomes’ wish to go back in the game, the quarterback gutted it out. High ankle sprains normally demand extended recovery time. CBS lead analyst Tony Romo brought up the possibility Mahomes might not play Sunday.

Kansas City will be ready, too. The Chiefs know Cincinnati has had their number. On the cusp of winning last year’s AFC title game, the Chiefs had to settle for a game-tying field goal on the final play of regulation after being first-and-goal at the 5-yard line. First overtime possession, Cincinnati’s Vaughn Bell intercepted Mahomes to set up Evan McPherson’s winning 31-yard field goal.

Not only is this Kansas City’s fifth straight AFC title game appearance, it’s the fifth straight year in which the Chiefs have played host. When not drawing mustaches on his sleeping players during insurance commercials, Reid now has 20 playoff victories to his credit, tying him with legendary Cowboys coach Tom Landry behind Bill Belichick’s 31.

So you know Arrowhead will be pumped Sunday. After beating the San Francisco 49ers in the 2019 season’s Super Bowl, the Chiefs lost to Tom Brady and the Buccaneers in 2020, then fell one game short of a third straight Super Bowl last year thanks to Cincinnati. You know the Chiefs want to settle the score.

It says here they won’t.

PHILADELPHIA — The Eagles lost two games without their starting quarterback, then plodded to a win in the season finale against the Giants’ backups. They saw themselves drop to the No. 4 favorite to win Super Bowl LVII...Read More