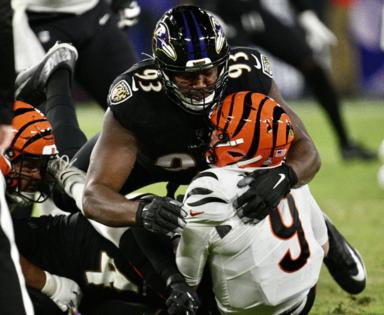 The Ravens returned to the playoffs but fell well short of their bigger goals as they finished another season with quarterback Lamar Jackson on the sideline because of injury. Debates over Jackson’s future will dominate the offseason, but the Ravens also have plenty to build on as they look ahead to 2023.

Here are five things we learned from their 2022 season.

The Ravens have reached another inflection point in the history of the franchise.

This last happened in 2018, when the Ravens drafted Jackson after missing the playoffs three straight years with an offense that was stuck in second gear. Owner Steve Bisciotti said he had considered firing coach John Harbaugh, and Harbaugh responded with foundational changes.

Don “Wink” Martindale took over the defense. Jackson stepped in for an injured Joe Flacco midway through the season and led the Ravens back to the playoffs. After that promising relaunch, Harbaugh handed the offensive reins to Greg Roman, asking him to build a “revolutionary” attack around Jackson’s next-generation run-pass skills. Sure enough, the Ravens stormed the league in 2019. Jackson was Most Valuable Player at age 23. Baltimore had its next great sports hero. Another trip to the Super Bowl felt inevitable.

And now, here we are three years later, wondering why the Ravens have won just one playoff game with Jackson at quarterback. Harbaugh replaced Martindale after last season. He’s in the process of replacing Roman. We’re all waiting to see if Jackson and general manager Eric DeCosta will make real progress on a contract extension or if the franchise quarterback will become the next face of the Ravens to pack his bags. Even if Jackson sticks around, he’ll have to kindle a relationship with a new offensive coordinator and find a way to stay on the field after he finished the last two seasons sidelined by injuries.

It’s strange to speak with such anxiety about a Ravens team that just made the playoffs for the fourth time in five seasons, that rediscovered its mojo on defense and pushed the Cincinnati Bengals — who might win it all in a few weeks — to the brink.

But we do not know what we will see when they line up for their season opener in eight months. Harbaugh will be in charge on the sideline. The defense, with in-their-prime centerpieces Roquan Smith and Marlon Humphrey and adaptable young coordinator Mike Macdonald, will be good enough to keep them in games. But will it be Jackson, Tyler Huntley or a fresh draft pick operating an offense re-imagined by Roman’s replacement? Until we know the answer to that question, we cannot predict with any confidence where this franchise is headed.

Whatever disconnect existed between Jackson and the Ravens over the knee injury that ended his season, teammates want No. 8 back. From their perspective, you don’t lightly cast off a quarterback with a 45-16 record as a starter. “You can’t let a guy like him go,” said defensive end Calais Campbell, as respected a voice as you’ll find in the locker room.

DeCosta said last week that he sees no reason why Jackson will not be the team’s starting quarterback in 2023, whether he plays under a new deal or under the franchise tag. He and Harbaugh opted for a full-throated endorsement, sweeping past whatever frustrations the Ravens might feel regarding Jackson’s approach to injury rehabilitation, his social media messages or his negotiating stances. But if DeCosta is seriously considering the more disruptive alternative, a monster trade involving the Ravens’ most important player, he has no reason to tip his hand.

Jason and Travis Kelce will make NFL history on Feb. 12 when they become the first brothers to play against each other in the Super Bowl.

That will be both terrific and tormenting for their families, who will try to walk ...Read More