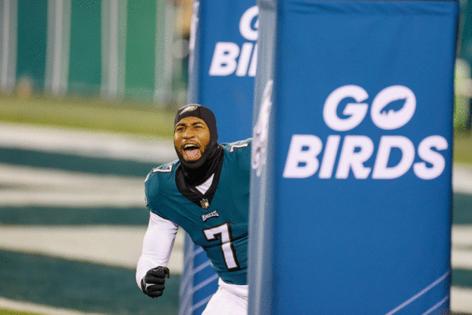 PHILADELPHIA — The Eagles lost two games without their starting quarterback, then plodded to a win in the season finale against the Giants’ backups. They saw themselves drop to the No. 4 favorite to win Super Bowl LVII despite having won 14 games, tied for the most in the NFL.

Were the Eagles a fraud? Did the 14 wins even matter?

The players felt the hate. After they routed the Giants, 38-7, on Saturday, they had a message for the haters:

“We here. We here, man,” Haason Reddick said. “We’re laying it out on the line. We want this thing. Badly. We’re showing we’re going to dominate. At least, we’ll try to be as dominant as we can be.”

Before the season the Eagles weren’t picked by most pundits to win the division, and they certainly weren’t expected to win a playoff game.

They’ve been ticked that they weren’t picked.

Did he understand why people questioned their legitimacy after losses in Games 15 and 16 against the Cowboys and Saints?

“Most definitely. We had lost two games in the last quarter of the season,” Reddick said.

So what, he said. The Birds earned the No. 1 seed and the bye week that came with it, but, in their eyes, they’d earned very little respect. They spent two weeks stewing, ears to the ground, hackles raised.

Jason and Travis Kelce will make NFL history on Feb. 12 when they become the first brothers to play against each other in the Super Bowl.

That will be both terrific and tormenting for their families, who will try to walk ...Read More