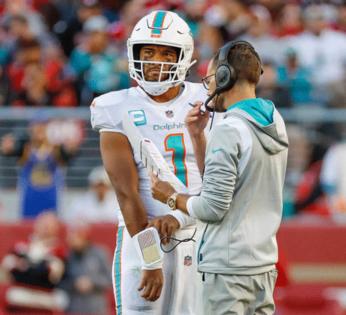 The Dolphins got a raw deal when the NFL moved up next week’s game at Buffalo. Having the game moved to Saturday night certainly won’t help Miami’s preparation or health/recovery. It also doesn’t help that the NFL moved this Sunday’s game against the Chargers to an 8:20 p.m. kickoff.

But the same thing could be said every week in reference to Thursday Night Football. The show must go on. No excuses.

If the Dolphins (8-4) take care of business, meaning winning their next two games, at the Los Angeles Chargers (6-6) and against the Bills (9-3), they’re back in first place in the AFC East. Both the Dolphins and Bills would have 10-4 records, assuming the Bills defeat the New York Jets this week, but the Dolphins would have two victories over Buffalo.

Coach Mike McDaniel likes to say adversity is an opportunity.

The Dolphins, in the midst of a grueling three-game road trip, are spending this week in Los Angeles after last week’s lackluster loss at San Francisco (because it makes more sense than coming back to South Florida between back-to-back games in California).

By the way, the early forecast calls for a high temperature of 34 degrees in Buffalo with a low of 28 degrees and a 24 percent chance of rain. No snow, no ice. So, for now, it’ll be seasonal, not extreme.

Having the Buffalo game “flexed,” a term that comes from the NFL’s policy of “flexible” scheduling, to Saturday night is the result of the Dolphins being successful and popular. Simply put, the eagerly anticipated Dolphins-Bills game is huge. It’s why the NFL has flexible scheduling, so it can better position late-season games to prime time to meet fans’ interests. OK, it’s really to meet the NFL’s financial interest, but whatever.

The Dolphins are intriguing. Look at the shift to a Saturday night game against the Bills as the price of fame.