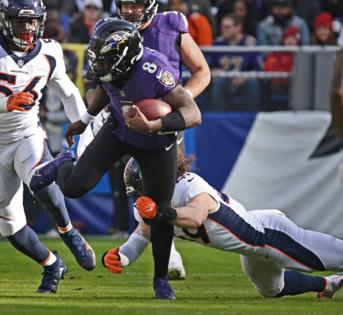 Ravens quarterback Lamar Jackson was absent from practice Wednesday and Thursday, and he probably won’t participate Friday either. He’s expected to miss a game and possibly two — or three — because of his injured knee, which ESPN reports is a sprained PCL.

Combined with the four games he missed last season because of a bone bruise in his ankle, injuries should be a concern for both team officials and Jackson when the sides meet this offseason for contract negotiations.

There is no need to panic. Jackson is only 25 years old, but the injuries have to be accounted for when a team considers making a running quarterback its franchise player for the next four or five years.

According to ESPN, Jackson has been hit a league-leading 877 times since entering the NFL in 2018, an average of 12.5 per game. There are some who believe Jackson isn’t prone to injury even though he is a running quarterback, but that’s absurd.

A running back who carries the ball 30 times a game is more susceptible to injury than one who has 15. That’s just basic math, but it’s also a big reason the average career of an NFL running back is shorter than any other position.

Players are bigger, faster and stronger than they were decades ago, which is why leagues on every level — from Pop Warner to college to the NFL — have altered their rules to cut down on the number of violent collisions.

Running quarterbacks get hit more often than the standard drop-back types. After Jackson, the Buffalo Bills’ Josh Allen is second in hits taken since 2018 at 805.

What do they have in common? Both are running quarterbacks, even though Jackson appears to have more scripted runs or run-pass options in his offense. But Allen is a behemoth at 6 feet 5 and 237 pounds.

Jackson is 6-2 and 212 pounds. There are a lot of linebackers and defensive backs who don’t want to take on Allen in the open field for fear of crashing into a player who is as big as some tight ends, but no one shies away from trying to knock down Jackson. They don’t want to be embarrassed by some of his slick moves in the open field, but no defensive player is going to back down.

Nielsen joined the Saints staff in 2017. Since, ...Read More