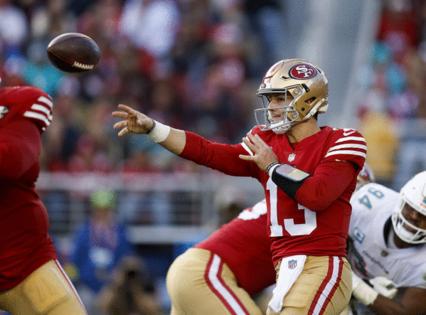 TAMPA, Fla. — There is no more consequential player to make your first NFL start against than Tom Brady.

The dubious distinction is given to the player chosen last each year in the draft, then honored at a festival in Newport Beach, California, a tribute for the trivial.

Brady’s homecoming opponent Sunday was supposed to be 49ers quarterback Jimmy Garoppolo. But he fractured his foot and likely is lost for the season. Starter Trey Lance broke his ankle in Week 2.

So the 49ers turned to Purdy, who responded by passing for 210 yards and two touchdowns in a 33-17 win over the Dolphins last Sunday.

Facing Brady, the prodigal son returning to the Bay area not far from where he grew up in San Mateo, could shake the facemask off any first-year quarterback.

“I think it’s really cool,” Purdy said following Sunday’s game. “Dude’s been playing football longer than I’ve been alive, so yeah, to have a first start against the GOAT, it’s going to be pretty cool. But just any other game, man, it’s got to be efficient, do my thing, and play football.”

The buzzword you hear most to describe Purdy is “moxie,” a confidence developed in four years as a starter at Iowa State.

“He’s a dangerous guy because he can run and he can throw the ball,” coach Todd Bowles said. “It looks like he plays a lot better when you speed him up. He plays even smarter and even faster. He does a good job and he’s got a lot of weapons around him. He practices against a great defense every day so I’m sure he’ll be ready.”

Since Bowles took command of the Bucs defense in 2019, Tampa Bay has won six of its last seven games against rookie starting quarterbacks and is 6-2 overall in that span. The only defeats: a 32-31 loss to Daniel Jones (making his first career NFL start) and the Giants on Sept. 22, 2019, when Matt Gay missed a 34-yard field goal on the final play; and a 20-18 loss to the Steelers and rookie Kenny Pickett this year. (That Steelers loss gets an asterisk, however. Pickett was injured after he was knocked to the ground by Devin White and checked for a concussion. Mitch Trubisky threw the game-winning touchdown pass.)