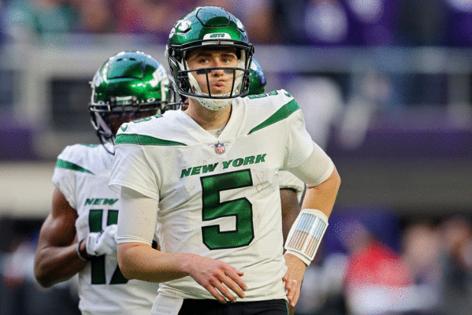 Two weeks ago, following the Jets’ 10-3 loss against the Patriots, Jets coach Robert Saleh declined to commit to Zach Wilson as the starting quarterback.

On Wednesday, Saleh had an opportunity to declare White the starter moving forward, but he declined to do so as he continued to say the intent is to get Wilson back on the field this season.

“We have all the faith in Mike. I said it before and I know the line if you have more than one quarterback, you have none. Well, we feel like we have three of them. We have three pretty damn good ones.

“Right now, while Zach is focusing on reconnecting and all of the different things we know he is capable of, right now it’s Mike’s opportunity. I would really love to focus on Mike and his opportunity and give him every chance to succeed.”

In his first start of the season, White completed 22-of-28 passes for 315 yards and three touchdowns in a 31-10 victory against the Bears in Week 12. On Sunday, in a hostile environment at U.S. Bank Stadium, White came back down to Earth a bit.

White completed 31-of-57 passes for 369 yards and had two interceptions in the Vikings’ 27-22 win against the Jets. Although White couldn’t follow up his first start with another outstanding performance, his play helped bring the Jets back after the team was down 20-3 early in the first half.

Gang Green had a difficult time finding the end zone as they converted 1-of-6 opportunities and 3-of-16 third-down conversions. White’s play has been an improvement from Wilson, who was subpar and inconsistent in his seven starts before being benched.

Despite going 5-2 behind center, Wilson threw for 1,279 yards, four touchdowns and five interceptions. When asked if he could be opened to the possibility of White being the long-term solution and a better football player than Wilson, Saleh again failed to answer the question.