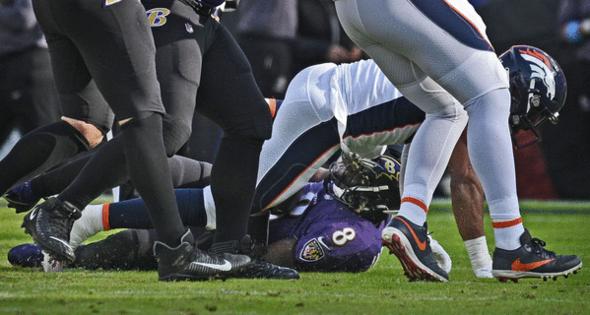 Jackson left the Ravens’ eventual 10-9 win over Denver late in the first quarter after a sack and did not return. Backup Tyler Huntley replaced him and helped lead the team to a last-minute comeback win in Baltimore. He finished 27-for-32 for 187 yards and an interception, along with 10 carries for 41 yards.

Jackson, a pending free agent, has been limited in practice at times this season but had not missed an offensive snap until Sunday. A bone bruise in Jackson’s ankle sidelined him for the Ravens’ final four games last season, when they fell out of playoff contention and ended the season 8-9.

“He’s probably less likely for this week, but it’s not impossible,” Harbaugh said. “After that, he’ll become more and more likely [to play].”

After Sunday’s trip to Pittsburgh, the Ravens will face the Browns in Cleveland on Dec. 17 and host the Atlanta Falcons on Dec. 24. According to ESPN, the Ravens have a 95.7% chance of making the playoffs and a 66.5% chance of winning the AFC North, which would secure a top-four seed and at least one home playoff game.

Huntley completed 64.9% of his passes for three touchdowns and four interceptions last season, when he made four starts and appeared in six games in relief of Jackson. Harbaugh said the Ravens “have a lot of confidence” in the former undrafted free agent.

“Both guys play a similar game, and we run the same basic offense with both players,” Harbaugh said of Jackson and Huntley. “So it’s not really going to change anything in terms of preparation, I don’t think. But he’s a player that’s got a lot of dynamics to his game. He can throw, he can run, he operates really well. Not as experienced, obviously, but he is experienced. He’s been out there. ... We’ll be excited to play, and our guys will be fired up.”

With Jackson sidelined, the Ravens signed quarterback Brett Hundley to their practice squad. Hundley, 29, spent part of training camp with the team before being released. A 2015 fifth-round pick, he’s started nine games over his NFL career.

— Harbaugh said inside linebacker Patrick Queen is “going to be OK” after suffering a thigh bruise Sunday. Queen was carted off being hurt in the fourth quarter, a play that Harbaugh said “was like a car wreck.”

— Harbaugh said he’s “hopeful” that left tackle Ronnie Stanley (ankle), who practiced last week but was inactive Sunday, will be available against Pittsburgh.

— Outside linebacker Devon Kennard was released from the practice squad, and wide receiver Binjimen Victor was waived.