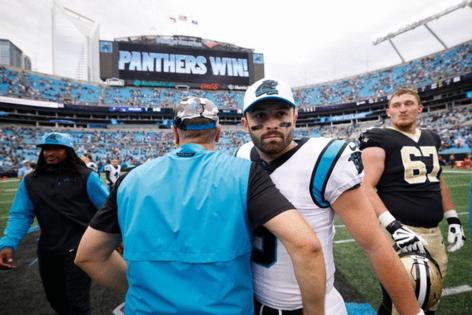 The Carolina Panthers and Baker Mayfield got a quickie divorce Monday.

The marriage lasted only five months, which was time for Mayfield and the Panthers to progress through an extremely brief honeymoon phase (training camp) to their first spat (a Week 1 loss) to more serious problems (Mayfield’s ankle injury) to irreconcilable differences (Mayfield’s 1-5 record as a Panther starter).

By Monday, interim head coach Steve Wilks had decided to demote Mayfield to third-team quarterback. When he heard that, Mayfield decided he’d like to be shown the door and be officially released. The Panthers obliged. Mayfield very possibly will end up as a backup quarterback on a team that has an injured QB or two (San Francisco? Baltimore?) and needs some insurance.

Carolina (4-8) moves on with Sam Darnold as its starter and PJ Walker as the No. 2 QB for the season’s final five games, including Sunday’s road game at Seattle. Mayfield moves on to an uncertain future after a very bad 2022. He asked for a trade once Cleveland recruited over him and brought in Deshaun Watson (out-bidding the Panthers for the tarnished former Clemson QB).

Then, when Mayfield got the trade he wanted to Carolina, he won the starting job, got everyone excited and then failed spectacularly as the starter, ranking near the NFL’s bottom in most every passing category (except getting passes deflected at the line — he was very good at that). Mayfield’s contract is about to run out, and he’s going to have to take a lot less money in 2023 and be a backup somewhere after what happened in Charlotte.

So what happened? How did it all go so wrong?

I’m still not sure, but Mayfield lost his mojo in a hurry when he didn’t have the fearsome rushing attack that was a big part of his one year of playoff success in Cleveland. And he didn’t get a lot of help from offensive coordinator Ben McAdoo, either.

Listen, Mayfield had me fooled, too. I wrote in July right after the Panthers made the trade that it struck me as both bold and desperate, and that the move could end up pushing the Panthers to the playoffs in 2022.

That wasn’t one of my finer takes. And there were others in that range. Robert Griffin III, the former Heisman Trophy winner turned football analyst, tweeted at the time: “Baker Mayfield and the Panthers are a match made in Heaven.”