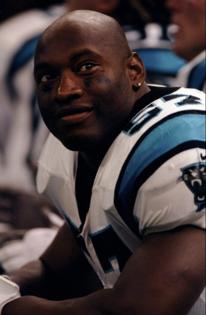 ROSHARON, Texas — On the very first two Carolina Panthers teams, in 1995 and 1996, Lamar Lathon was my favorite defensive player to watch.

Sam Mills was steadier. Kevin Greene, once he got there in 1996, was a purer pass rusher. Those two both ended up as Pro Football Hall of Famers.

But Lathon? He was more explosive than either of them. My gosh, what a player.

A 6-foot-3, 265-pound Adonis of an outside linebacker, Lathon looked like he had been the model for the six sculpted Panthers snarling outside what was then known as Ericsson Stadium.

When Lathon hit quarterbacks, they toppled like statues. He hit Dallas wide receiver Michael Irvin so hard three minutes into Carolina’s first-ever playoff game on Jan. 5, 1997 — legally — that he wrecked Irvin’s shoulder, knocked him out of the game and changed the course of one of the most significant wins in Panthers history.

Lathon had 13.5 sacks in a single season in 1996. He was Brian Burns before Brian Burns was born.

“Lamar was a game-wrecker,” Bill Polian, the former Panthers general manager who recruited Lathon to Carolina, said in an interview. “He had incredible power. Incredible explosion. Incredible range. And he was one of the very few linebackers I’ve ever seen who could run right over an offensive tackle.”

And then, Lamar Lathon basically disappeared.

By 1998, his NFL career had been cut short by repeated injuries. He never had a season anything like his Pro Bowl year of 1996 again. He moved back to his home state of Texas.

I heard rumors that he mostly didn’t come out of his house anymore.