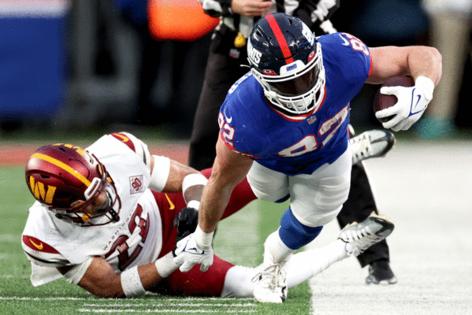 Graham Gano’s 58-yard field goal try fell woefully short at the buzzer of a 20-20 overtime tie between the NFC East rivals that are battling for a playoff spot.

Daniel Jones hit Richie James for a 14-yard completion to Washington’s 43-yard line with 16 seconds to play, but the Giants managed only three more yards the next two plays before Gano’s short kick.

Taylor Heinicke drove Washington 90 yards in eight plays for a 28-yard touchdown pass to Jahan Dotson that tied the game with 1:45 to play in regulation. A wild 20-yard completion to Curtis Samuel on 4th and 4 from the Washington 27 kept the game alive.

The Giants’ offense managed nothing down the stretch of regulation and went 4-and-out on the opening drive of overtime. But the defense held up against Ron Rivera’s conservative play-calling once the Commanders crossed midfield and forced the punt.

The Giants drove to 4th and 3 at the Commanders’ 45-yard line, but rather than kicking a 62-yard field goal or going for it, Daboll took a delay of game penalty and punted.

Daboll was coaching like he was grateful to be tied. Azeez Ojulari sacked Heinicke, forcing a fumble and recovery on Washington’s opening drive of the second half. That set up a Jones 6-yard TD pass to Isaiah Hodgins for the 20-13 lead.

Then the Giants’ offense completely shut down and put all the pressure on the defense. Washington had the ball almost the entire second half. Saquon Barkley mostly was a shell of himself.