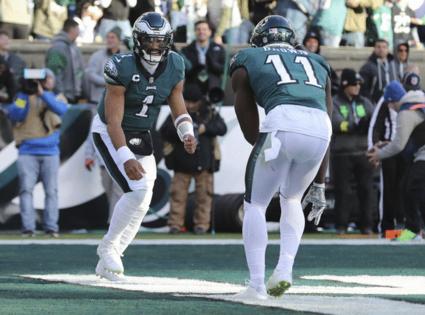 The chants are only getting louder for Eagles quarterback Jalen Hurts.

Hurts on Sunday delivered another stellar performance against the Tennessee Titans. His efforts — 392 combined yards and four touchdowns (three passing, one rushing) — proved to be the deciding factor in the Eagles’ 35-10 victory at Lincoln Financial Field.

As Hurts departed the field victorious, he was greeted by shouting similar “M-V-P” chants near the home tunnel. With five regular-season games remaining, Hurts has emerged as a legitimate candidate for the league’s top award. The Eagles own the NFL’s best record at 11-1, including first place in the NFC East.

Brown and Smith overwhelm the Titans

Star wide receiver A.J. Brown admitted he was experiencing a wave of emotions ahead of Sunday’s game against his former team. He successfully rid himself from those feelings. Brown torched his former teammates with a game-high eight catches, 119 yards, and two touchdowns.

During a draft day trade with the Titans, the Eagles surrendered first- and third-round picks in order to acquire Brown, whom they subsequently signed to a four-year extension worth up to $100 million. Brown has helped transform the Eagles offense into a high-octane machine. When Hurts wasn’t delivering picturesque basket-type passes to Brown, the 24-year-old quarterback was tossing completions to wide receiver DeVonta Smith, who finished right behind Brown with five catches, 102 yards, and one touchdown.

All week long, the Eagles knew exactly who was coming to town. The defense proved to be up for the challenge as it limited Titans running back Derrick Henry to 11 carries and 30 rushing yards.

Early and often, coordinator Jonathan Gannon stacked the box with extra defenders. It took a collective group effort to quiet the former Offensive Player of the Year. For a majority of the game, the interior defensive line set the tone while others played cleanup duty. Linebacker T.J. Edwards paced the unit with a team-high six tackles.