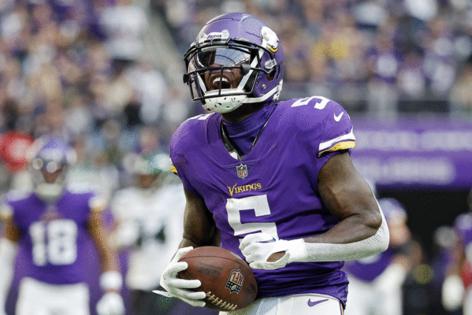 MINNEAPOLIS — The Vikings are 9-0 in one-score games. They put a new spin on their escape act on Sunday afternoon.

Though they allowed Jets quarterback Mike White to lead his team to 486 yards in his second start of the season, the Vikings stopped New York on five of six red-zone trips, sealing a 27-22 win with Camryn Bynum's fourth-down interception of a pass White intended for Corey Davis at the Vikings' 1.

The win moved the Vikings to 10-2, giving them at least a share of their first NFC North title since 2017. They can clinch the division outright with a win next Sunday at Detroit.

A Kirk Cousins touchdown pass to Justin Jefferson midway through the fourth quarter turned out to be the winning points on a day when the offense struggled.

The Vikings led 20-3 with 1:58 to go in the first half, but their offense went dormant through the end of the third quarter.

They ran just 12 plays in the third, gaining only 10 yards as the Jets' pass rush continued to affect Cousins. New York scored 12 unanswered points, all on Greg Zuerlein field goals, to make it 20-15 at the end of the third; three Vikings red-zone stops were all that kept the Jets from taking the lead.

Given time to work in the pocket on the first drive of the fourth quarter, though, Cousins completed all five of his passes for 62 yards, hitting Thielen for 25 yards over the middle of the field on a play where Jefferson also appeared open. On a third down from the Jets' 10, Jefferson ran straight at D.J. Reed, then used hesitation to freeze the cornerback before breaking outside. Cousins hit him for a score that made it 27-15 with 8:40 to go.

But for the second time, the Jets would claw back from a double-digit deficit.

They started their next drive by pulling center Connor McGovern around the left side of their line, springing Zonovan Knight to the sideline with a block on Eric Kendricks for a 48-yard game. A 24-yard pass interference penalty on Duke Shelley put the Jets on the Vikings' 3. It appeared for several minutes like the Vikings had come up with their fourth red-zone stop of the day, but Jets coached Robert Saleh challenged an on-field ruling that White was short of the end zone on fourth down. A replay review showed he'd broken the plane for a touchdown.

Down 27-22, the Jets' defense forced a three-and-out, including a second-down Cousins incompletion to K.J. Osborn where Jefferson appeared open downfield. And with completions of 23 and 31 yards to Davis, White drove the Jets into position for a go-ahead touchdown. But Braxton Berrios dropped a touchdown pass in the end zone on fourth down with 1:43 left.

The Vikings went three-and-out again, taking only 24 seconds off the clock.

White drove the Jets to the Minnesota 19 and Harrison Smith nearly ended the game with an interception. Two plays later, Bynum did.