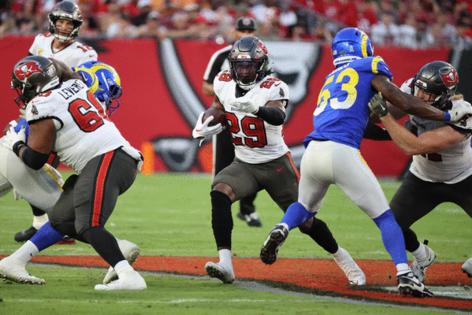 TAMPA, Fla. — Funny, the bonds that keep us together.

It’s not proximity. It’s been almost 10 years since they have lived in the same state, let alone the same town. It’s not birthdays, either. The Big is in his 40s now, and his Little is still a month shy of 24.

It’s not color, background, blood or vocation. If you were to muse about this relationship back in 2007, there would have been no reason to expect it would continue to carry on today.

Except, maybe, for the books they shared. And the games of HORSE. The afternoons in the park, or the pizza at Minsky’s in Kansas City. In retrospect, the ties that bind are the ones you don’t always see.

For Little Brother Rachaad White, that means having someone to lean on.

And for Big Brother John Waller, that means seeing the world through another’s eyes.

You know White as the running back who has clawed his way up the depth chart for the Buccaneers in this, his rookie season. He’ll be the one wearing the specially designed cleats to shine attention on Big Brothers Big Sisters of Tampa Bay on Monday night in the NFL’s annual My Cause My Cleats campaign.

It seems a lifetime ago that Rachaad was an 8-year-old who couldn’t sit still on the couch while waiting for Waller to show up at the family home off Euclid Avenue in a dicey part of Kansas City. His three older brothers had all been matched with Bigs, and Rachaad was finally old enough for a mentor of his own.

“I still remember it, clear as day,” Waller said this week. “His brothers were all cleaning the house and he was sitting, waiting with a huge grin on his face. I connected with his mom immediately because I could just tell she was a leader. She was stern, but kind at the same time. It was noticeable how much her sons respected her because of the order she kept in the house.

“There was just an immediate connection with the whole family, and it felt so natural.”