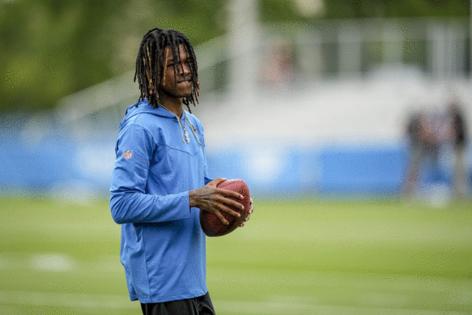 ALLEN PARK, Mich. — After the Lions suggested it would be a long shot for rookie receiver Jameson Williams or defensive end Romeo Okwara to see the field this Sunday against the Jacksonville Jaguars, the team has activated both players off the injured list a day ahead of the matchup.

That paves the way for Williams to make his season debut, nearly 11 months after he tore his ACL in the College Football Playoff championship game, while playing for the University of Alabama.

The Lions traded up 20 spots in April's draft to snag Williams with the No. 12 overall pick and have since taken a conservative approach with the speedy rookie's rehab, holding him out the entire offseason program and only having him begin practicing last week.

This week was the first Williams worked with quarterback Jared Goff and ran routes against defenders. All week, the coaching staff said the biggest thing they needed to see was the formation of chemistry between the rookie and veteran QB. Physically, Williams said this week he's feeling good.

"I wouldn't say I feel rusty," he said. "I'm getting back on my feet. I've been running around for a minute now, so it's just I'm back out with the team."

If active on Sunday, it's unclear how many snaps Williams would see, but given the way the Lions have handled other players coming back from long-term injuries, including Jerry Jacobs, DJ Chark and Josh Reynolds in recent weeks, it would likely only be a handful of snaps on offense. From there, Williams' role should steadily expand the remainder of the season.

The same can be said for Okwara, who is more than 13 months removed from tearing his Achilles tendon. Detroit's sack leader in 2021, he appeared in just four games last year before suffering the season-ending injury. With rookie Josh Paschal returning to the lineup after a two-game absence this week, the team has the necessary depth to ease Okwara back into action.

The Lions needed to clear just one roster spot to make room for the two additions. They had one already open after placing receiver Trinity Benson on injured reserve a couple weeks back. They cleared the second by placing Romeo's younger brother Julian on IR. He suffered an elbow injury during Detroit's Thanksgiving game against Buffalo.

Sean Payton’s got a long to-do list as he gets settled into his new Denver digs.

He’ll have to get his UC Health Center key card and the human resources paperwork figured out and probably check the team store for a ...Read More