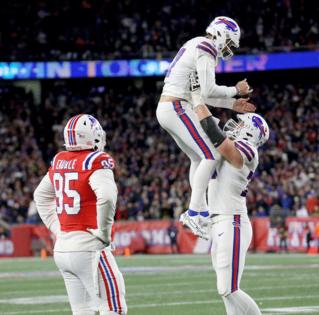 FOXBOROUGH, Mass. — One by one, the old Patriots axioms fell Thursday, a crumbling facade for a suddenly average franchise.

Josh Allen out-witted and out-worked the Patriots for the fifth time in six tries, extending plays beyond Belichick’s control until he had the game firmly in his grasp by the fourth quarter.

And the Pats playing their best football after Thanksgiving?

Including their holiday loss the last week, the Patriots are now 0-2 with five games remaining that will determine whether they’re a winning team; a fact once taken for granted in New England like the hard-earned habits underpinning the entire operation.

The Pats rolled over 24-10 against the Bills on Thursday night, leading for all of 4:55 in a defining game. Allen went 22-of-33 for 223 yards and two touchdowns. Rookie cornerback/returner Marcus Jones scored the Patriots’ only touchdown while making his offensive debut in the first quarter.

After that, it was all Buffalo.

The Bills (9-3) totaled 358 yards in a balanced effort, while the Pats offense struggled to reach 242. Diggs and Bills wideout Gabriel Davis (two catches, 15 yards) both caught touchdowns before running back Devin Singletary scored another in the second half.