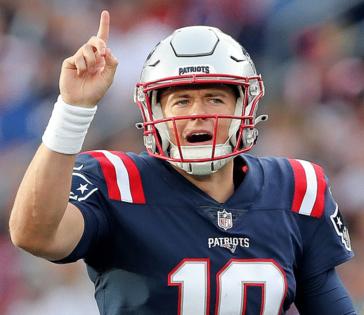 He hasn’t been able to elevate the Patriots when necessary, which will be the case Thursday night against the favored Buffalo Bills. The Pats are 2-7 as underdogs with Jones starting.

One was at Buffalo last year in a windstorm. Jones only threw three passes in the game.

The other was a road victory in Los Angeles against the Chargers. Jones didn’t throw a touchdown pass in the 27-24 upset and barely completed half his passes, going 18-of-35 for 217 yards. On Thursday, he’s going to have to do more, or else the Patriots will continue to be mired in mediocrity, which is where they’ve been since Tom Brady left.

On Thanksgiving night against the Vikings, Jones produced his best game of the season. Only, he wasn’t able to do much with the game on the line in the fourth quarter. The Patriots went three-and-out, three-and-out, and turned the ball over on downs, before the clock ran out on a 33-26 defeat.

Statistically, with Jones passing for a career-high 382 yards, two touchdowns, and no turnovers, it’s hard to be too critical of the performance. But ultimately he didn’t deliver.

“We want to be able to score more points and win the game, so that’s all that I care about,” Jones said after the loss. “That’s all that we care about is winning, and we didn’t do that tonight.”

It’s not all on Jones of course. But being the quarterback, that’s usually where it starts.

While the fact-finding mission on Jones and whether or not he’s a franchise quarterback has been made more difficult in Year 2 with a new set of coaches and a new offense, it would be nice to see him take down an elite team amid all the internal chaos.