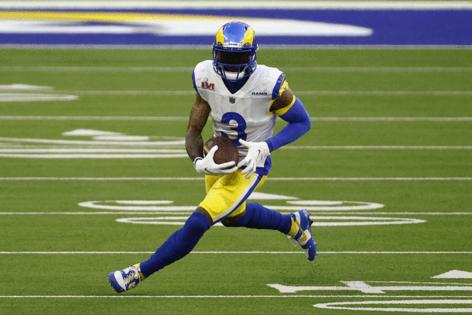 As perhaps an admission that that their pursuit was over, the nameplate that had adorned Beckham's locker since last season finally has been removed.

Beckham, who has been recovering from knee surgery, reportedly has narrowed his choices to the Dallas Cowboys, New York Giants and other playoff-bound teams.

Beckham, 30, signed with the Rams near midseason last year. The three-time Pro Bowl player caught a touchdown pass early in the Super Bowl LVI victory over the Cincinnati Bengals before suffering a left knee injury in the second quarter. The injury required his second major surgery on the knee in three years.

Coach Sean McVay and his players made numerous public statements throughout training camp and the early part of the season in an attempt to convince Beckham to rejoin them.

But in October, in a series of tweets between Beckham and other Twitter users, Beckham wrote, "LA knows where I wanted to be … but they didn't offer me …. ANYthing!" In another tweet, he said the Rams' offer was "the lowest of the lows."

McVay said at the time that he was aware of the tweets.

"I love Odell, we have constant dialogue," McVay said. "I think he also knows that certainly I don't think that's the last one that would come from us."