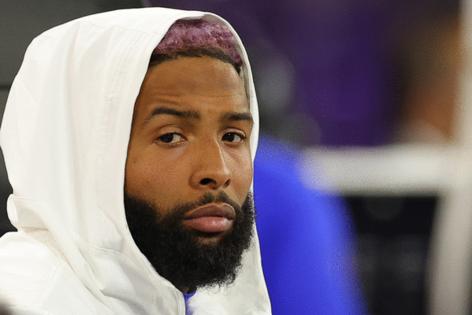 Giants receiver Sterling Shepard said his goal is to convince his good friend Beckham to cancel his other scheduled visits with the Buffalo Bills on Friday and the Dallas Cowboys on Monday.

“I want to try to keep him here, yeah,” Shepard said at his locker Wednesday with a smile. “That’s gonna be the plan.”

Beckham even has plans to stop by Shepard’s house to see his friends’ daughters. Shepard and Saquon Barkley both said they’d spoken to OBJ as recently as Tuesday.

So maybe Shepard and Barkley could lock all the doors like the 2015 Los Angeles Clippers did with DeAndre Jordan until Beckham agrees to sign.

All jokes aside, though, while Beckham would improve this team, he is not the offensive weapon the Giants need right now to get going.

A healthy Beckham would add a desperately needed No. 1 wide receiver to Daniel Jones’ receiving corps. But his presence would not change the Giants’ blueprint for winning games on offense: by riding Barkley as their focal point.

Right now, the Giants are short on answers for how to get Barkley going with three losses in their last four games and Washington on deck.